Lee Holleran – “He just loves it” 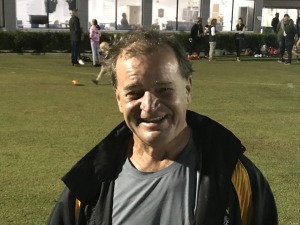 The Mayne Tigers congratulates Umpire Lee Holleran or “Leroy” as he is known to his friends as he takes the field this Saturday to officiate his 600th open age game, a truly extraordinary effort.

While Lee has been plying this gig for 24 years, he will be joined by long term compatriot Gary Paul who umpired with Lee in his first game some 15 years ago.

They will be umpiring the QFA Division 2 Seniors clash between Beenleigh and Kenmore at Beenleigh at 2.00pm on Saturday and will be sure to be treated to a special welcome for such a massive milestone.

Lee has adjudicated nineteen grand finals in his time with the highlight being a Division 1 grand final from a former competition structure between Caloundra and Wynnum where the Vikings came away with the spoils by one point. He tells us there were no complaints about the umpires!

In addition to his extensive career as a whistleblower, Lee spent ten years with the Mayne Juniors and Colts coaching teams and volunteering for all sorts of duties as well as mentoring several new generations of club umpires.

It has always been a family affair with his two children Nick and Casey both playing and being fixtures with him along the way helping to coach, umpire and follow in their father’s footsteps.

It is no doubt he is so well known in footy circles given he also played over 200 games for various clubs before taking up the whistle.

If you ask Lee why he is still going strong at 60 years young, he will always cheerfully respond that “he just loves it!”

All the best mate for a good game on Saturday.