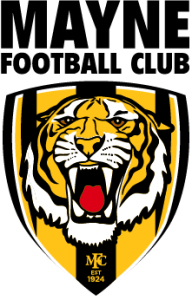 The Mayne Football Club would like to acknowledge the passing of much loved Past Player Doug “Jammo” Jamieson.

Doug was recruited by legendary Tigers Coach Mike Darby to Mayne from Wodonga in 1970 where he went on to represent the club at senior and reserve grade level. He was immediately successful being awarded the Reserve Grade Best and Fairest Trophy in his first year.

He went on to win the Reserve Grade Best and Fairest Award again in 1972 and in turn was appointed Captain Coach of the Reserves in 1973. A tall lean and very talented ruckman, Doug regularly played games in the Seniors during his time with the Tigers in addition to his very successful record with the Reserves.

Reports from Doug’s longstanding Mayne Tigers friends affectionately refer to him as a loveable larrikin with a great personality. Doug moved to Mackay in the mid 70’s and coached and played footy there as well.

Lifelong friend Terry O’Donovan called the Tigers Past Players and Supporters Group Function to order at the Mayne v University of Queensland game on Saturday to raise a glass to Doug in the knowledge that he was near the end and would be greatly missed.

A celebration of Doug’s life will be held in Mackay next Monday 29th July 2019 at 2.00pm. More details can be obtained from Terry O’Donovan.

The Mayne Football Club would like to pass on it’s best wishes and condolences to Doug’s family and friends at this sad time.