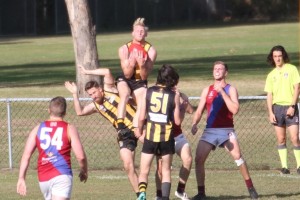 The Tigers hit back from last week’s disappointment to record a solid win against the University of Queensland Red Lions yesterday at the Den.

After a difficult week with more absences, injuries and illnesses, the Tigers were pleased to be able to select a fairly strong and committed contingent to take on the Red Lions.

The Tigers started very well to kick the first three goals of the game led by Zac McLean with two and Troy Hammond kicking the first of his five for the day. However, they lost their way in the second half of the first term to leave the door ajar for the Students but fortunately they couldn’t hit the scoreboard effectively kicking six points and spraying several others.

Coach Chris David reminded the Tigers of their roles and how they needed to get their game back on track at the first break which with due credit the group reacted effectively to kick five straight goals in the second term without a response from the Students.

The Tigers took a six goal lead to the main break thanks to the hard work of their midfield group led by Jack Collings but it was also the determination of the backline to hold out the Students at all costs. Fraser Thompson was flying high to spoil the Student’s entries while Mitch Bruce and Clint Brunnenmeyer along with Dean Hartley were very solid.

Troy Hammond kicked a goal within a minute of the third term but the Students came to life to kick three straight before Hammond goaled again. The Tigers finished the third term in good form sparked by a clever pass from debutant Gus Shaw to veteran Josh Duffy who duly kicked it through. The quarter finished with an inspiring tackle by Nick Warren in the goal square to earn him an easy goal giving the Tigers a match winning eight goal lead at the conclusion of the quarter.

The Tigers commenced the last term as they had finished the third with solid forward pressure to extend their lead to ten goals at the ten minute mark.

The Tigers then let the Students off the hook allowing them to finish off the term with the last four goals but the game was already over and it was a solid win for the home side given the eight changes to the side from the previous week.

There are two rounds remaining now as the Tigers move up to seventh place on the back of this win but no chance of making the finals now.

The next game is also at the Den against the Maroochydore Roos. This will be the last time the two clubs meet with the Roos elevated to the QAFL roster for 2020. The Tigers have enjoyed some mighty tussles with the Roos over the years highlighted by two Grand Final wins in 2015 and 2016.

Make sure you come down to see this historic game next week.