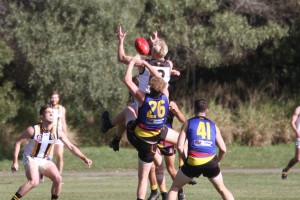 The Tigers led for most of the day against the Caloundra Panthers yesterday at Carter Park only to falter in the last five minutes of the game.

The Panthers pressed very well in the last quarter to have the Tigers on the back foot for most of the term however the defence was holding true until the 23 minute mark. The Tigers had two critical opportunities to put the game away but missed their chances, however the Panthers took theirs to break the hearts of all the Tiger fans in what had been a very entertaining and close encounter.

The Tigers backline was terrific all day led by veteran Dean Hartley who continues to be one of the best players in the competition. He was ably supported once again by young gun Mitch Bruce who is playing his defensive role with maturity and composure. Ryan Holman was also creative and composed as always while Fraser Thompson was a very welcome return to the senior side.

Similarly the Caloundra defenders were equally organised and quick to provide a clean break to send their game into attack making for a tense contest as both sides rebounded back and forwards as the game ebbed and flowed.

The Tigers midfield fought out a wonderful duel with the Panthers with Captain Jack Collings getting a mountain of possession while his young protégé Zac Quin was quick and inspired.

After a tight first quarter where Caloundra took a five point lead, the Tigers fought back to go into the half time break with a ten point lead and all the confidence that they would be able to hold the line and kick away.

The third term was an even affair with the Tigers retaining a five point margin to set up another close and exciting finish against a top of the table team.

The Tigers forward line work hard under pressure with Nick Warren flying high crashing packs and doing his utmost to provide a target along with Troy Hammond.

To lose in the last few minutes of the game was obviously disappointing for the Tigers, however once again the side has been able to put itself in a winning position through exceptional effort. It now comes down to the group to work on what is required to turn these strong displays into wins and everyone at the club knows this is only a smidgeon away with so much talent in the playing squad including the ever improving seconds side.

The Tigers play the University of Queensland at home next week as part of another Mayne Past Players and Supporters Group function.