Tigers go down to Kings in hard fought finish 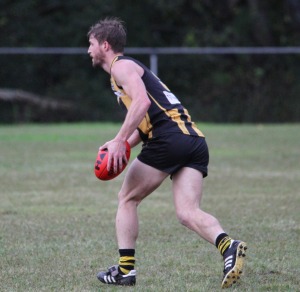 After an exciting and free flowing game last week, the Tigers were forced to fight out a tough low scoring contest with the Coorparoo Kings in the pouring rain at the Den on Saturday. Unfortunately, after hitting the lead at the four minute mark of the last quarter with a goal from Nick Warren, the Kings were able to regain the lead and fight out a ten point win despite another goal to young gun Zac Quin in the highest scoring quarter of the game.

The Tigers were desperate to win this one with their year on the line every week until the last round. In a horror year it has seemed that every week the Tigers’ fortunes were turning around only to be dashed on Friday night. The loss of Jamie Ivers and last week’s Mick Nolan Medallist Troy Hammond at the eleventh hour as well as Kane Tyson forced to the reserves due to work commitments once again upset the team’s preparations and sums up 2019 from the beginning.

However, despite these challenges the Tigers still fielded a quality team and weren’t looking for excuses.

In what was a tough encounter in slippery conditions both sides worked extremely hard to get the better of the their opponents but the margin for most of the game sat at just a hand full of points before the Kings slipped away in the very last moments of the game.

The Tigers engine room was once again well served by their most experienced warriors in Jack Collings and Sam Paterson who were ideally suited to these conditions, just the way they like it. Both of them never say die and fight the game out with their last ounce of blood.

Seb Windsor continued his excellent season with another quality game while Zac Quin’s debut season goes from strength to strength with increasing maturity on a weekly basis.

In a game where scoring was at a premium, the Tigers backline held firm all day with another young man in Mitch Bruce leading the way.

The Tigers play Caloundra at Caloundra this coming Saturday and will hope to get back on the winners list and push themselves as hard as possible to the end of the year.