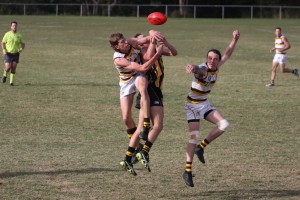 After several weeks of menacing the top teams and just falling short, the Tigers put it all together yesterday to triumph over local rivals the Aspley Hornets in four entertaining quarters at the Den in front of a rapturous Reunion Day audience.

The Tigers were treated to a motivational talk by club legend Carl Herbert in the dressing rooms just prior to the game to set the scene for this important game. Herbert gave a passionate account of how much the Tigers meant to him and the part the club has played in his life stirring the emotion for the young Tigers.

It was however a slow start for the Tigers as the Hornets came out fired up to set the scene with a blistering start over the first ten minutes of the game before the Tigers were able to get their plans into action. There were nine goals scored in the first quarter in a very exciting and fast paced thirty minutes with the Hornets five points the better at the break.

The second quarter was a different matter with the Tigers kicking six goals to two in a strong showing of what this young outfit has been producing in recent weeks over the most fancied teams in the competition.

The midfield led by Club Captain Jack Collings and his warhorse compatriot Sam Paterson bludgeoned their way through their opposition to will the Tigers forward at every contest and stoppage while Ryan Eyles and David Tyquin provided the same rugged support when their time was due.

While the Tigers defence was bolstered by the return of Dean Hartley to provide his usual leadership, it was the forward’s much improved defensive pressure which provided the difference this week. The inclusion of Ben McElligott to the mix added significant forward pressure while Troy Hammond was aerially terrific as he once again provided the spearhead for the Tigers and ultimately be awarded the Mick Nolan Medal for his efforts.

The Tigers went into the main break with a three goal buffer and their tails up.

It wasn’t over however with the Hornets once again retaliating with pride at stake to match the Tigers for an even contested third stanza.

Tigers Coach Chris David spurred his team on at the last break to go out and win the game and enjoy the experience. The return of Dan Schmidt to the ruck provided the Tigers with the spark to finish the game off as he dominated the middle of the ground in the final quarter and then went forward to take some big marks in the final stages of the game.

The Tigers also received considerable energy from their running young brigade in Zac Quin, Seb Windsor and Nick Holleran who each provided the necessary zip to get the team going.

The Tigers kicked away with a five goal quarter to seal the game and give them considerable confidence with just five games to go and everything on the line for the year.

The Tigers host traditional rivals Coorparoo this coming Saturday in another do or die game.