Tigers push Pumas all the way 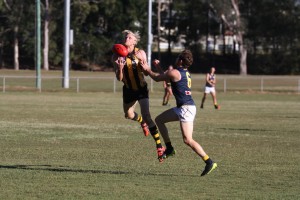 The Tigers took on the Springwood Pumas yesterday at the Den and managed to give them quite a scare, particularly early in the game skipping away to a five goal lead half way through the first term. The Pumas have significantly improved in 2019 and currently sit in second place on the ladder with some very strong prospects for the pointy end of the season.

The Tigers once again showed that they can compete with the best teams in the competition for extended periods, however the challenges presented by the best have caught them short.

There has been much spoken about the various injury and illness challenges facing the Tigers each week and unfortunately there were five important changes to the group which left the Tigers putting together another different line up.

Coach Chris David was pleased with the effort of his team and the exciting passages of play that saw them lead the game well into the third term. He was forced to lament the experience and effective way that the Pumas ground out the last quarter in their half to overrun the gallant Tigers.

Pumas Coach Brad Pollock was happy to admit that the Tigers had him worried until his group gained the ascendency late in the game to achieve their win.

The Tigers got off to a flyer and looked like they would run away with the game such was the pace and effectiveness of their attack on the ball and quick delivery into the forward line. The Tigers high flying blond full forward Nick Warren has been a revelation this year as he attacks the contest in the air with exciting abandon. His attack on the contest provides those around him with important opportunities. Captain Jack Collings kicked the Tigers first goal within the first two minutes while Warren kicked two for the term as part of a six goal blitz for the home team. The Pumas however pared the lead back to two goals at the first break with three quick goals in a frenetic start to the game.

Both sides kicked four goals in the second quarter in an exciting term of footy with Zac McLean getting into the action to record his third goal while Fraser Thompson and his fellow defenders including great work from Mitch Bruce were doing a sterling job to contain leading goalkicker Jordan Bain to two for the half.

The Tigers had retained a three point lead thanks to errant kicking from the Pumas and plenty of hard work.

The Third quarter was an arm wrestle with the Pumas kicking two goals to the Tigers one to set the scene for an exciting finish with the visitors just six points up.

Unfortunately the Tigers could not rise to the occasion with the Pumas trapping the ball in their attacking zone for long periods and ultimately securing the win.

The Tigers will reset to play local rivals Aspley in the Annual Reunion Day game at the Den next week.