Once a Tiger, always a Tiger 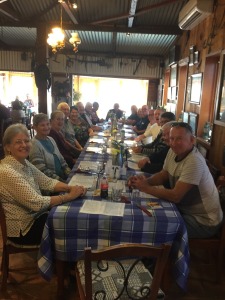 Further to a recently reported catchup with Jock Aitken from the Mayne Tigers 1963 Premiership Colts team, Rod Barber was able to put together an enthusiastic group of forever young and lively Tigers for a rowdy get reunion yesterday. Rod reported that they had a great time at Bill and Lyn Rose’s Fernvale Bakery and Restaurant, Bill being one of those successful Tigers of yesteryear.

While there has been some sad losses to the group and a few who are still to be located, a group of eight players and their partners attended along with long term friend Hendrik van der Kamp representing their Redlegs opponents in the 1963 grand final.

Three apologies were received from people out of town and a representative of one of the players who has passed away attended on their behalf. People came from the Sunshine Coast, Gold Coast and Brisbane.

Bill and Lyn also arranged for a cake to mark the occasion, and to once again celebrate the event from some fifty six years ago which still seems fresh in their collective minds. In addition to plenty of tall tales, some of them might even be true, the old Tigers sang the club song with appropriate gusto.

Rod is still on the lookout for those yet to be located which seems certain to generate another get together in the future.