Battle of the Tigers on the Sunny Coast 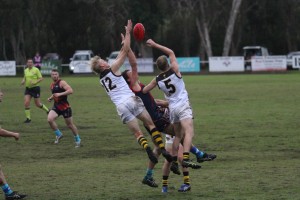 The Mayne Tigers took on ladder leaders, the Noosa Tigers yesterday at Weyba Road in tough conditions to fight out an entertaining and traditionally tough contest. The final score was not a true indication of the game as the Mayne Tigers took the game up to their much more fancied rivals all day.

The local Tigers led up front by goal kicking star Connor MacDonald slipped away to a two goal lead at quarter time despite the Mayne Tigers having their fair share of possession but they weren’t able to get the result on the scoreboard.

Mayne forwards Nick Warren and Troy Hammond provided the Tigers with critical targets but the Noosa defence was equal to the task as they cleared the area with terrific efficiency. Warren in particular threw himself at the contests and through the air in entertaining fashion to have the Tigers supporters on the edge of their seats.

MacDonald kicked four critical goals for Noosa in the first half before the Mayne defenders were able to shut down his effect in the second half. Veteran Clint Brunnenmeyer made sure he blocked the forward’s run to support his fellow defenders Fraser Thompson and Dean Hartley and make the necessary difference.

Tigers ruckman Jamie Ivers pushed back into the Tigers defence along with Jack Collings to help out as the two team’s zone defence responded equally to keep the ball rebounding back and forwards. Mitch Bruce continues to show maturity beyond his years with yet another strong performance while speedster Jesse Gough gave the Tigers plenty of pace in the heavy conditions.

The lights were on from the beginning of the game, the ground surface was very heavy and intermittent rain swept Weyba Road all day, but the quality of the game did not suffer with both sides kicking efficiently all day to record a minimum of behinds. The quality of the skills was also a credit to both sides with ball handling a feature.

The Tigers were still in the game at three quarter time with a four goal lead to the locals. The visiting Tigers kicked three quick goals to start the final term, two from Troy Hammond and a great snap from Zac McLean to narrow the margin to just ten points.

It looked like the game could go to a cliffhanger, but the locals showed why they are leading the competition, rattling on six goals in succession to snuff out any chance of a boilover, before Joe Amery kicked the last goal of the game for the visiting Tigers.

The Tigers can take plenty out of the encounter despite the finish with an eleven goal improvement on the last time they met.

The competition takes a weekend break for the Intrastate game between South and North Queensland in Townsville.

The next game is on the 22nd June at home against the Springwood Pumas.