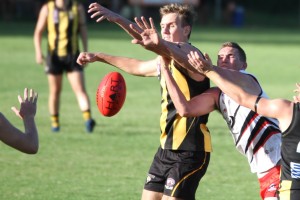 The Tigers enjoyed a welcome return to form on the weekend coming up against the Burleigh Bombers at the Den posting a significant score and a healthy margin to bring home some much needed competition points.

Coach Chris David was all praise for his troops for their performance who have endured one of the most difficult starts to a season in many years with an endless injury list which he cautiously hopes is at an end. He was also pleased to report the playing group have been fantastic in the way they have supported each other throughout the year and can now hopefully look forward to better days ahead.

The Tigers got off to a good start to record a six goal opening term in their best start this season and continued on in positive style for the entire day.

Young Tigers ruckman Jamie Ivers was given a special role to provide a spearhead for the team and as usual he responded to the coaches instructions to perfection to rack up six important goals, the last of which was a mercurial left foot snap which capped off a great day.

The Tigers forward line fired well with Troy Hammond kicking four goals and Nick Warren chiming in with three of his own to lead the team to their highest score this season.

Captain Jack Collings has led the club from the front through the difficult period with his usual gritty and selfless efforts and it was therefore pleasing to see him at the front of this important win with a best on field performance. Coach Chris David remarked that it was Collings effort to get behind the ball to assist the defence and get the attack going which he highlighted as instrumental in the Tigers win.

The debut of Zac Quin into senior football has been remarkable this year as he continues to show his value to the team. He shows maturity and attributes beyond his years to always make something happen whenever he is around the footy.

The defence has been bolstered in recent weeks with the return of Fraser Thompson to the men’s group and together with the experience of Dean Hartley made a huge impact. The Tigers have been able to use utility Ben McElligot down back as well to provide further experience to this group. McElligot was all smiles after the game with this the first win he has been a part of since 2015 when he played an important role in the Tiger’s premiership that year before leaving to play at Sandgate for a few seasons.

The Tigers accumulated their score evenly across all quarters as they kicked their way to a twelve goal win.

It will be exciting to see the young Tigers take on the ladder leaders Noosa this week with a much better line up than last time they met at home earlier in the year.