Panthers win battle of the cats in the wet 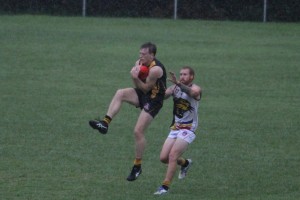 The heavens opened up just as the main game got under away yesterday at the Den making for a very close first term between the Tigers and the Caloundra Panthers with only one goal scored in thirty minutes of gripping footy.

Both clubs were desperate for a win as they came into this game and it showed as desperate defence countered do or die attack keeping the Sponsors Day crowd on the edge of their seats all day.

The rain abated in the second term but the ground was soaked making for a test of the skills of all players and with the Panthers having played several wet games already this season, they handled the ball with a bit better certainty than the Tigers. However, what the Tigers lacked in the crispness of their hands they made up for in courage and desire.

Dean Hartley led the Tigers backline from the front as he has done so many times to have the back six repel a traditionally quick Panther outfit. He was well supported by Mitch Bruce and Ryan Holman before he was sent forward late in the game.

Geelong product Harley Goodwin continues to impress and clearly enjoyed the conditions to rack up possessions and use his raking left foot to effect while Zac Quin was once again a revelation.

The well drilled young Panthers backline gave the Tigers a headache all day. The Tigers dominated possessions to fire the ball forward but the Panthers marked and switched to perfection in the slippery conditions to defy their opponents any easy scores. They also mounted impressive counter attacks with their mosquito fleet on show as usual.

There was only a goal in it at half time with both teams kicking three hard to come by goals and both clubs felt justifiably confident that it would be their day.

Sam Paterson revelled in the conditions with his customary brutal attack on the contest to once again be the Tigers best while Jack Collings and David Tyquin were also in and under working hard to get the team on a roll.

The Panthers kicked four goals to the Tigers two in the third term as they slipped off the chain to break away to a match winning lead in the conditions.

The Tigers won the last quarter but it was all too late in what was a bruising and exciting game.

The Tigers will hope to get a win next week against the UQ Red Lions in the inaugural game on their new facility.