Coorparoo even the score for Anzac Day 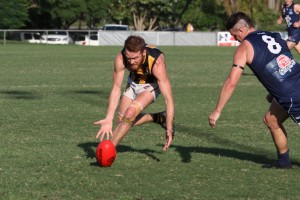 The Coorparoo Kings evened the score in the Annual Legacy Anzac Day Clash beating the Tigers in an entertaining game at Giffin Park yesterday making it one all after the initiation of this great rivalry game last year.

The Kings got off to a flying start taking the Tigers by surprise to take a four goal lead at the first break and looked like running away with the game. The Tigers however regrouped at their quarter time huddle to commit to halting the Kings march and get the game back on their terms.

The Tigers dug very deep in the second term to arrest the Kings momentum with some courageous displays all around the ground against a much bigger opposition. If not for some wayward kicking the scores could have been level by the main break but a return of eight points from nine scoring shots was not helping.

As usual the Tigers brave midfield led by Sam Paterson were in and under creating plenty of possession and opportunities but the forward entry let them down creating too many turnovers. Delivery had to be precise with the Kings boasting a strong high marking defence led by former Lion Daniel Merrett who marshalled them to perfection.

The Tigers went to the main break having stemmed the tide and with some cause for optimism that the game was still well and truly alive. A tiring Coorparoo could be beaten by the smaller and faster Tigers under the right circumstances. The third term was all Tigers as they dominated possession and field position but it was once again field kicking and accuracy which let them down at critical times.

It looked like they had whittled the gap but as they went into red time the Kings kicked two quick goals. Unfortunately the scoreboard didn’t tell the true story.

Former Mayne Junior Zac Quin made his debut for the Tigers and it wasn’t long before he made a big impression on the game but it was an exciting on the run goal in the last quarter which set the game alight.

The Tigers were also well served by Jesse Gough on the wing leading the small man brigade in another courageous game.

Team leaders Ryan Eyles and Jack Collings were heavily tagged by the Kings but still managed to get plenty of ball showing the way as did David Tyquin.

Mitch Bruce carried on from his last game to give the Tigers run out of defence while Troy Hammond was a great target up forward making the most of his opportunities while swingman Jamie Ivers was constructive in several roles.

In the end the Kings were the deserved victors however the Tigers never gave in with the scores for the last quarter a fitting draw.

Brandon Stewart from Coorparoo was awarded the very coveted Wayne Stewart Medal for the Best and Fairest on the day. The award was presented by Wayne’s brother Tyrone.

The Tigers play Caloundra next week at the Den as part of the Sponsors Day activities.