Old Tiger in biggest battle of his life 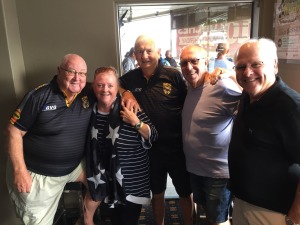 Several old Tigers and one Redleg got together yesterday to catch up for the first time in over fifty years in a timely reunion with one of their great friends now facing one of his greatest battles.

However, it was a day for sharing of memories of good times and lives in the service of others.

Thanks to a mutual but unexpected connection with Redleg friend Hendrik Vanderkamp, Mayne Tigers Life Member Rod Barber was able to arrange the day to catch up with 1963 Mayne Colts teammate Jock Aitken who is currently battling cancer. Rod had been searching for Jock for many years and was thrilled to be able to make this day finally happen.

It was also an opportunity to bring together other old friends in Mayne Tigers legend Ian Hawke (Hawkey) and the sister of former teammate Peter Fenton, Di Day, herself a Life Member of the Mayne Juniors.

Rod proudly recalled that “Jock was our grand final day Captain for the Colts 1963 Premiership team. Peter was the team Captain for the season but was very unlucky to be ruled out due to stomach ulcer and was not allowed out of bed.”

Jock has led a very full life after being conscripted for service in Vietnam after his time at the Tigers where he did three tours. He achieved the rank of Sargent.

Always enjoying time involved in sport he employed his massage expertise for 15 years at the Brisbane Broncos as well as several other rugby league clubs around Brisbane. Due to his life long friendship with Hendrik he also teamed up with the Redleggers at Kedron for four years. Still plying his considerable skills, Jock was only last week seconded by the Townsville Cowboys to “fix” Jason Taumalolo’s significant knee troubles. After a lifetime of service to others, Jock is now in the biggest fight of his life with a diagnosis of cancer.

Hendrik Vanderkamp played for Kedron in the colts team that lost to Jock’s Tigers in 1963 but they have always been friends. Hendrik went on to play in excess of 200 games for Kedron and has been a significant servant of his club to this day.

Hendrik is also friends with another Mayne Colts player Bill Rose, also from that famous Colts team. They have recently been working together to help drought affected farmers in western Queensland .

Hendrik, a very good cook, has made and sold pickles, sausage rolls and jams raising $7000 which was donated directly by him to farmers. Bill Rose also donated a large sum raised through his Fernvale pie shop. Rod and Hawkey have been inspired to assist them as they continue to help our farmers.

Hendrik and Hawkey became friends at Kedron High School and have kept in constant connection through their respective and considerable footy exploits. Hawkey played in several junior premierships for the Tigers before being a member of this mercurial 1963 team. We have written previously about the number of lads that played in this group who went on to do so much for the club over many decades with Hawkey going on to be a coach and administrator at Mayne and the Banyo Bloods. He was President of the Tigers for four years and recently awarded Life Membership. After a few attempts to pin down the very busy Hawkey, he was finally and formally awarded with his Life Membership Certificate and Badge, fittingly by Rod yesterday in an appropriate moment. Rod, of course himself a Life Member of the club having served in every role possible at the club since he first played for the club in 1951 and still doing all sorts of things including the Breakfast Creek Raffles.

Rod was also very thrilled to be able to have Di Day nee Fenton join them for this great reunion which was a terrific surprise for Jock. Di was Peter’s sister and long time friend of Jock. The Fenton’s owned a local nursery near Crosby Park while Jock lived on the other side of the Park.

Peter won the inaugural Clem Ryan Medal in 1963 as best Colts player in the competition. He became a tug operator and famously received an award for saving the old Riverside Walkway which had come adrift from colliding with the Gateway Bridge during the 2011 floods. He tragically died in a workplace accident a few years later.

It is to be hoped that Jock can beat his current challenges but one thing is for certain, he has some wonderful friends who will be watching out for him thanks to a life of giving to others.

And Jock’s parting words for the day, “once a Tiger always a Tiger! “