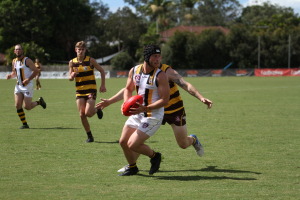 The Tigers found some much better form yesterday with the return of several key movers taking on the Aspley Hornets at Graham Road. However, despite taking a handy lead with ten minutes to go, they just couldn’t quite hang on to the end.

While the Hornets came back to grab the points there was much to like about the improved Tigers who expect to welcome back several more important players after the Easter break.

The emergence of key forward Jordan McDonald kicking five goals in his first senior game for the Tigers was a critical boost for the group providing a great foil for Nick Warren up front who absorbed a huge amount of pressure in the front half.

Young gun Mitch Bruce had a break out game in his second season for the Tigers as he continues to show his versatility across the park.

The Tigers kicked off at the unusual time of 11.15am as a curtain raiser to the NEAFL clash between Aspley and Southport so it was hot and humid conditions for most of the game.

The two teams were evenly matched with the Tigers taking a one point lead to the first break with four goals apiece as they went goal for goal in an exciting and fast paced period. Goals to Housego, Eyles, Paterson and McDonald showed the Tigers had plenty of avenues to goal.

Unfortunately the Tigers lost Housego before the end of the first break and were forced to play with a three man bench for the remainder of the game which was a considerable disadvantage in the conditions.

It was a similar see sawing game in the second quarter with the Hornets going to the main break with the biggest lead of the day at seven points and it was anyone’s game at that point.

Rugged midfielder David Tyquin is starting to strike the form he took into premiership success in 2016 and after a two year layoff travelling the world he gave the Tigers plenty of hard ball which will only become more crucial in the weeks ahead.

The Tigers won the third quarter by a smidgeon to lead by one point at the final break. It was an exciting session with Jordan McDonald kicking three consecutive goals on the back of three marks which set the team alight and set the scene for an exciting finish. Jamie Ivers moving into the ruck also gave the Tigers plenty of first use ball to set up the quarter.

The last quarter began as the game had tracked with goal for goal but at the twenty mark the Tigers broke clear for a ten point lead on the back of a great crumbing goal from Captain Jack Collings and everyone was on tenterhooks in the hope they could finish the game off.

Unfortunately it wasn't to be with the Hornets kicking into gear to dash the Tigers hopes. However, there was plenty of good signs of promise for the weeks ahead.

The competition takes a break for Easter and then the Tigers will play traditional rivals Coorparoo in the Annual Anzac Day Legacy Clash at Coorparoo this year on the 27th April 2019 commencing at 2.00pm.