Noosa bring their “A” game to the city 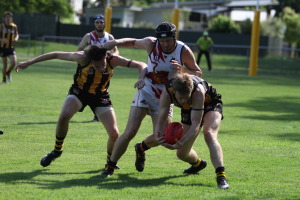 The Mayne Tigers were upstaged yesterday by their Sunshine Coast cousins Noosa in a comprehensive effort at the Den in front of the Ladies Day crowd.

The Tigers welcomed some of their talent back for the round 3 clash but lost a similar number of players to the long injury list on the back of last week’s hitout in the wet. However there were no excuses for the ultimate deficit created by the Noosa team who were far too good on the day with their hard running and support for each other led by a diminutive Tyler Stack in the middle who showed the way all day. They are clearly looking to improve on the grand final runner up position in 2018 and will certainly be contenders in 2019.

The Tigers were on the back foot all day but did not give up as they tried everything to stem the tide. The Tigers backline have rarely been under this sort of pressure in recent years but as always it was 100 game defender Dean Hartley trying his hardest to marshall the men’s group to keep things respectable.

The local Tigers started reasonably well with Andrew Housego back in the lineup kicking an early goal in the first term and provide the target needed after the loss of key forward Nick Warren from last week. Housego is in the hunt for his 300th appearance for the club and still has plenty to offer the young Tigers in 2019.

It was once again the second term where the Tigers were pushed to breaking point with no answer for the rampant opposition who piled on ten goals with only an inspirational goal from Benn McElligott roving his own ruck work from the centre bounce to kick a much needed solitary goal for the term.

The Tigers midfield leaders Jack Collings and Ryan Eyles did their best to rally the flagging team along with Ryan Holman who was also very good under duress.

The Tigers young guns in Seb Windsor and David Tyquin also worked hard in their effort to get the Tigers going using their skill and pace wherever possible but in the end the Noosa team ran out strong winners to take the honours on the day.

It was great to have them stay back after the game to share a drink and some healthy camaraderie.

The Ladies Day was a terrific success with fifty ladies enjoying a very nice lunch and congenial company along with a few fun activities raising $1,400 for Motor Neurone Disease Research.

The Tigers will play Aspley next week in a local derby at Graham Road at 11.15am as the curtain raiser to the Aspley v Southport game in the NEAFL at 2.45pm.

The Reserves kick off at 9.00am and the Colts will play after the NEAFL at 5.30pm in a big day for local footy.