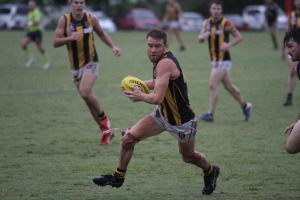 The Tigers came up against a fired up Springwood Pumas in their first game of the season yesterday after sitting out Round 1 with a bye. The game was played at the Lowe Oval, a fortress for the Pumas over many years and one that the Tigers have rarely breached.

In a further advantage to the locals, the skies opened up to make the game a slippery and close encounter suiting the bigger bodies of the Pumas. To their credit though, they were by far the better side on the day however the Tigers battled it out to the end in courageous spirit.

The Tigers have had a horror pre-season with an extensive list of freak injuries and illnesses taking their toll to test the depth of the club in what is usually an issue in June but not before their first battle.

In light of that adversity it was up to the experienced hands to take the lead so it was fitting that Corey Massingham would kick the first goal of the game but it wasn’t until the seventeenth minute of the third quarter before the Tigers were able to draw their next blood by kicking three in succession to make the scoreboard look more respectable.

The pressure around the contest and the tackling by the Pumas lead by Rhan Hooper directing traffic was immense but the young Tigers were also hard at it with hard nuts Ryan Eyles and Sam Paterson in and under doing their best to will the Tigers on.

The Tigers welcomed back premiership player Benn McElligott and he immediately injected some important strength straightening the side up whenever he got his hands on the ball. The Tigers are missing both their regular ruckman at this stage but it was McElligott that got the Tigers moving later in the game when he stepped up to the rucking role.

The forward line was starved of opportunities but new recruits Nick Warren and Troy Hammond made the most of their chances to provide targets when the Tigers midfield got some clean ball.

The Tigers were stocked full of young recruits and none better than Seb Windsor who showed a clean pair heals on several occasions and was rewarded with a clever goal late in the game to cap off his day.

The Tigers play Sunshine Coast rivals the Noosa Tigers at the Den next Saturday with the hope of bolstering the team during the week. It is also Ladies Day so everyone will be keen to impress in front of family and friends.