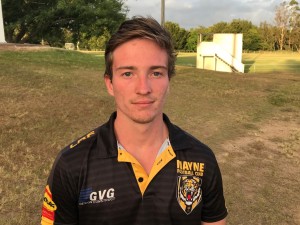 The Mayne Football Club is very pleased to announce the appointment of Lochie Wills to the role of Colts coach for 2019.

Lochie has been with the Mayne Tigers for two years. He was firstly a key member of the 2017 Colts as Team Captain and while making his Senior debut in 2018, he also completed an impressive season in the reserves taking out the Coaches Award. He has an extensive background in sport, having played most of his juniors with the Everton Wolves, before finishing at the Zillmere Eagles in 2016. He was part of a Premiership team in 2015 at the Eagles.

He is an accomplished rower which culminated in him taking on several coaching roles in this sport over the last four years including winning Head of the River on two occasions.

Lochie has served his AFL coaching apprenticeship at Zillmere Juniors for the last two years leading the under 12’s and under 14’s.

He is also a Member of the Simon Black Academy where he is studying Business and Sports Management.

President Russell Ditchburn advised in announcing the appointment, “Lochie is without doubt an impressive candidate who, while only turning 20 years of age very shortly, has achieved so much in his time and will be a terrific addition to our coaching department.”

Lochie will be supported by his good friend Mitch Bruce who also debuted in the seniors this year and has been assisting him over the last two years at Zillmere. Mitch is also an impressive young man who played every game in the seniors in 2018, is renowned for his strategic thinking and is already proving to be a wonderful member of the Mayne Tigers.

The Mayne Tigers focus will be to continue the development of young men like Lochie and Mitch through the Colts programme providing opportunities wherever possible for important roles in football and community life.

The Mayne Tigers thanks Danny Brady for his terrific work over the last three years in leading the colts which has seen many young men like Lochie and Mitch graduate to the senior teams.

Recruitment and planning for 2019 is well underway and the Mayne Tigers is looking forward to a great year ahead for the Colts programme.