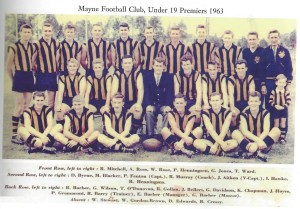 After playing in a very successful group through the Mayne Juniors, Greg was a premiership player in the Mayne Tigers 1963 Colts team, one of the most successful groups of young Tigers who went on to form the basis of the Mayne Football Club for many decades, both on and off the football field as players, coaches, administrators and benefactors.

Greg was an inaugural member of the Banyo “Bloods” Football Club along with many of his Mayne contemporaries, going on to be a member of their first premiership team in 1972 and backing it up in 1973. The Banyo Football Club was an integral part of the Mayne Family for twenty four years after being formed by the Tigers in readiness for the 1970 season.

In addition to taking on administrative roles at the Bloods, Greg was also very generous with his time and resources as a successful builder assisting with many projects to get both the Mayne Tigers and Banyo Bloods up and going.

Amazingly, Greg lost a kidney during the 1963 Colts season playing at the Gabba but went on to achieve so much in his 73 years.

A celebration of Greg’s life will be held at the Albany Creek Crematorium on Thursday 15th November 2018 commencing at 9.30am and all Members and Supporters of the Mayne and Banyo Football Clubs are invited and encouraged to attend.

The Mayne Football Club wishes to extend their condolences to Greg’s wife Vicki, son Andrew and all of their family and friends at this sad time.