Guy Gardner – The man behind the scenes 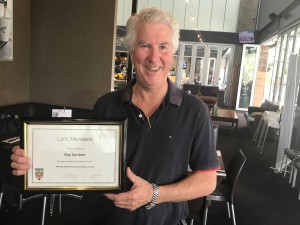 My wife Ann and I caught up with Guy Gardner, his wife Sandra, son Sam, daughter-in-law Lib and almost one year old grandson Charlie today for lunch to make an important presentation of his Life Membership of the Mayne Football Club.

We wanted to make this presentation at the recent Annual Awards night but Guy and Sandra were away on a much needed European vacation and only recently returned. Sam and I had made plans that this would be an appropriate way to mark the occasion. We get together regularly to have lunch, catch up on family matters and of course talk all things footy but this was a bit more special.

Guy has been the man behind the scenes for the Mayne Football Club since 1997 when he fatefully brought his two boys, Beau and Sam to play footy for the Tigers. A keen football lover since his earliest memories, and a committed family man, Guy was always going to be involved with the boys sporting activities but it was very unlikely that he could have imagined that twenty one years later he would still be involved with the Tigers in such an extensive way.

Guy has volunteered his time and business acumen to the Tigers since the boys started, performing roles as Team Manager at junior and senior level, a committee member for the juniors and seniors including the last eight years as Treasurer. He is also rightly proud of his efforts as a junior coach taking his under 12’s to a premiership in 2002.

Guy and Sandra also ran the Tigers senior canteen for many years playing to his enjoyment of cooking and good food. Homemade pies and high quality curries were always on the menu setting a very challenging standard for all to follow.

In his professional life, Guy is one of the men behind the very successful Brisbane civil construction business, GVG Design Construct who has provided a Major Sponsorship to the senior arm of the Mayne Football Club since 2011. In the period of his involvement with the Mayne Juniors, and with his business partner Darryl Vaughan’s support, GVG provided annual sponsorship for a junior development programme which worked with local northside schools to promote the Mayne Tigers. The Juniors were able to fund a mature qualified sports coach as part of the programme which saw the Mayne Juniors numbers swell to over 200 juniors.

In addition to GVG’s sponsorship, Guy has used his considerable influence with associated businesses to sing the praises and value of philanthropy directed towards keeping young men in sport. Guy’s passion and selfless approach has enabled the Tigers to finance a quality programme at all levels for over two decades to keep hundreds of young men involved in sport.

In amongst all this is a person who never seeks recognition, always wants to see the Tigers moving forward and never fails to have a plan which will see the club’s finances appropriately met and managed. Guy has instilled these qualities in his sons with Sam now on the club committee helping with the finance role. Sam played all the way to senior level and now is an important member of the club’s planning for the future.

The Mayne Tigers can be very thankful of the day that Guy and his family chose them as the place for the boys to play footy.

And today, over another enjoyable meal we have shared together, we were pleased to acknowledge that young Charlie will certainly be playing footy for the Tigers and it will all begin again.

I congratulate Guy on his very worthy Life Membership of the Mayne Tigers and for his friendship and support over the last twenty one years.