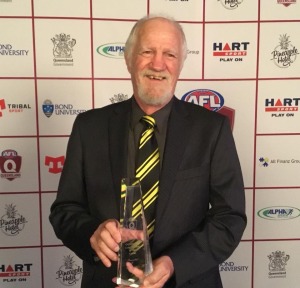 Mayne Tigers Vice President Richard Fell was honoured with an award for Outstanding Long Service to AFL in Queensland last night at the 2018 Community Football Awards held at the Royal International Convention Centre.

Richard has been associated with the Mayne Football Club since 1968 when he emigrated from the United Kingdom as a young man.

The Mayne Football Club was playing a game down the street from where he was living and after watching for some time, he approached a club member and enquired as to how he might get a game.

This was a fateful encounter and one which has shaped the next fifty years of his life in Australia.

Richard or Dick as he is affectionately referred played football for Mayne for a few years when the club fielded a team in the Metropolitan League at the time and then was a founding member of the Banyo Football Club which was formed by the Mayne Tigers in the early seventies as a sister club playing in the SQAFA. The association with Mayne was very close for the next 20 years with players moving back and forwards between the two clubs before the Banyo club was dissolved.

After having been a player and administrator with the Banyo Football Club, Dick brought his son Duncan to play for Mayne in the early nineties as a junior and from that point on has been in continuous service of the Tigers, firstly on the Junior Committee and as a team manager until Duncan graduated to senior football in the late nineties.

Dick progressed to the Committee of the Senior Club at that point and has remained continuously in one position or another since that time.

He was the Club Treasurer from 2002 to 2008 steering the club through a very difficult time when funds were very hard to come by and it was his considerable discipline and strength of character which enabled the club to always meet its financial commitments to members and suppliers.

In 2009, Dick was elected to the position of President, a role he was very proud to undertake, albeit that the club was still working hard to have success on and off the playing field. However, his leadership at the time was always based on fortitude and pragmatism, and one where service to his constituency was front of mind.

Dick held the position of President for four years until 2012, overseeing the club’s fortunes gradually improve to the point where the club was in a financially sound position and the playing strength was also gathering momentum.

In 2013, when he could have moved on to greener pastures, his love for the club which had been a mainstay of his life for so long drew him to retain an important role as Vice President, a position he still enjoys to this day.

In late 2013, the club revised its Strategic Plan with the Six Pillars expected of the AFL with Brand and Culture one which resonated strongly with Dick as a person with a deep knowledge and enthusiasm to maintain and promote the club’s rich history. A significant part of the Strategic Plan for Brand and Culture was to re-engage with Past Players and Supporters and reform a group of that name.

Dick and two of his contemporaries in Rod Judd and Graham McColm reformed the Mayne Past Players and Supporters Group in 2014 and it has been going from strength to strength ever since. They have not only raised valuable funds for important projects including facilities but also provided numerous opportunities to bring people together and recognise their efforts over the club’s long history. Projects have included recognising the players in the club’s first premiership in 1927 as an example, organising a lunch for their descendants. An annual reunion day has also been a huge success with Dick leading the way over many years.

Dick is not just an administrator, he is a significant and capable hands on person having done every job necessary to get the Tigers on the paddock. In addition to the many administrative roles, he has rolled his sleeves up over the years to work on mowers and linemarkers, manage the canteen and bar, be the backup timekeeper while one of his great joys has seen him enjoy decades of experience helping to fundraise at the Mayne Tigers iconic Breakfast Creek Friday Night Raffle.

He now lives at Bribie Island but still never misses a game or being part of the many meetings and activities in and around the club. In conjunction with his now son-in-law, he also continues to help manage the canteen.

The Mayne Tigers have been very fortunate to have Dick Fell and his wonderfully supportive family in wife Ellen, son Duncan, daughter Anna and now son-in-law Jonno involved, all of whom continue to help the club keep it colours flying high.

Dick is a Life Member of the Mayne Tigers and a person worthy of recognition for his many years of service to AFL.