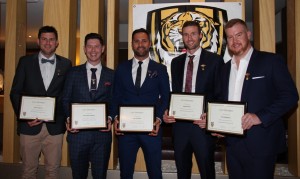 Caleb Brown, Corey Massingham, Luke Faulkner, Luke Ferguson and Tom Ditchburn were there to receive their awards while Guy Gardner and Ian Hawke were out of town but were all very thrilled to be recognised by the club they have served for so many years.

Luke Ferguson stole the show last night with his moving speech in response to this award giving credit to his older brother Mitch and his very supportive parents as wonderful role models. He also credited the club and the many individuals involved as playing a dominant role in his personal development.

Ian Hawke has been recognised for his life long support of the Mayne Tigers and Queensland Football.

The following records provide an insight into why these individuals have been worthy recipients of Life Membership.

For service to the Mayne Football Club and Queensland Football.
Mayne Junior through the 1950’s and early 1960’s
Mayne U16, U17 and U19 Premiership Player
Mayne Reserve Grade through the 1960’s
Banyo Premiership Player 1972
Mayne Juniors Committee Member and Coach 1970’s.
Mayne Committee Member 10 years
Mayne President 1987, 1988, 1989, 1991
Continuous support for the Mayne Tigers since the 1990’s.
Brisbane Lions Life Member