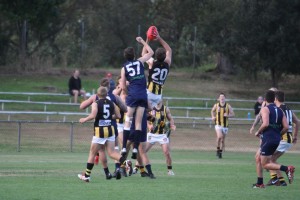 After leading by five goals just after half time the Tigers run was stopped by an experienced Coorparoo Kings who turned the tide to go on to win the QFA Division 1 Elimination in a cliff hanger by two points to break the Tigers hearts at Giffin Park.

The Tigers were brave and bold from the outset playing to their strengths of youth and speed running through the middle to create opportunity with Clint Brunnenmeyer and Jack Collings leading the way from the middle.

The Tigers forward line made the most of every entry to lead by two goals at the first break stunning their more experienced opponents. Running goals from Ryan Eyles and Nick Holleran and some big marks from Kane Tyson and Sam Nevins had the Tigers up and going.

The Tigers had made the most of a strong northerly in the first term but were determined to continue the game plan which was working so well for them. A goal in the first minute to Kane Tyson followed by a strong mark and goal to Jamie Ivers got the Tigers off to a dream start to the second quarter to push the margin out to four goals, a lead which they took to the main break.

The loss of yet another prime mover in Dean Hartley from last week’s clash with Maroochy could have left the Tigers exposed but a move of Adam Mueller to his favourite spot of centre half back paid off brilliantly with his marking, spoiling and leadership giving the Tigers the control they needed in the back half. Young gun Mitch Bruce continued his good form into the final with another strong game capping off a great debut season.

Fraser Thompson and Jordan Morrison were also combining well to keep the Kings under control to leave the Tigers very optimistic about their chances at the half way mark.

After getting out the blocks quickly in the third term with a goal to Corey Massingham, the Tigers looked to have the momentum under control.

An unfortunate head injury to one of the Coorparoo Kings created an extended delay as he was attended to and taken from the ground. The extended break seemed to be the catalyst for the Kings to get into the game and for the Tigers to go into their shell.

After two and half quarters of run and carry the Tigers were forced into going wide and play a slower more physical game orchestrated by the bigger and more experienced Kings.

The Kings Ryley Buntain started to get into the game while Ben Gibson took some telling marks in defence before going forward to create problems for the Tigers defence.

After leading by thirty one points early in the third term the Kings had whittled the lead down to just ten points at the final break.

Tigers coach Chris David pleaded with his charges to take the game on, play it on their terms and go for broke.

A goal to Gibson early brought the lead back to just four points and with another two goals the lead was firmly in the hands of the Kings at the eighteen minute mark.

The Tigers weren’t about to give in though with a goal response to Corey Massingham and some momentum in their favour, however the game was largely played out in the Tigers back half in an arm wrestle. A tremendous effort by the Tigers defence for the final ten minutes of the game left the Kings victorious by two points in what was a thriller finish.

Chris David gave a positive wrap of the game and the season to his players for their terrific effort. It has been a great year of rejuvenation for the Tigers with seven young locals making their debut setting the club up well for 2019.