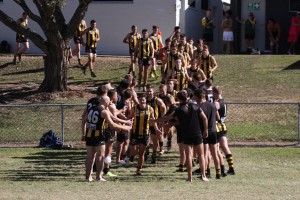 The Maroochy Roos showed why they are leading the QFA Division 1 competition with a flawless display to outclass the injury ravaged Tigers at Mott Street yesterday.

In a brighter note, Jake Magill celebrated his 100th game for the Tigers in what was hoped to be a more competitive game but it was still a great occasion for this dedicated Tiger who has endured hard times and success on his journey to this milestone.

The Roos were at full strength yesterday in both grades in the last home and away round for the season, an enviable position as they now enjoy a week off to prepare for a defence of their premiership status.

While the Tigers lost three players from last week’s team maintaining the out of action list of senior players to eight, they did gain the experienced Adam Mueller, Ryan Holman and Clint Brunnenmeyer back into the team but it wasn’t enough to contain the rampant Roos.

The Roos slipped away to a five goal lead at the first break to set the scene for their day while the Tigers only first quarter goal came from 2018 debutant Chas Van Leeuwin.

In a positive address to the players post match, Coach Chris David congratulated the Maroochy Football Club on their win, but also praised the Tigers for their efforts under fire and in particular the game played by Mitch Bruce, playing in his first season out of colts. In a season where he has played every game after debut, it was a breakout display which will stand him and the Tigers in good stead for the future.

The Tigers held the Roos to nine goals to the main break with some great defence with Fraser Thompson doing a great job to hold goal kicking machine Mitch Scholard to two goals at that point.

It was down to only a few Tigers who were able to tackle the bigger and stronger Roos with Ryan Holman and Ryan Eyles in particular showing just how it is done.

The Roos exploded in the third quarter to kick away with Scholard kicking six for the term on his way to the impressive total of 100 for the season. Roos stalwart Josh Norman kicked five to back it up in his usual impressive fashion.

The Tigers didn’t give in with Captain Jack Collings trying to get his team going but it didn’t seem to matter what the Mayne team did the ball invariably ended up in opposition hands in one of those dirty days when nothing was going to go right despite all the effort.

All the efforts of previous weeks have certainly paid off as the Tigers retain their points advantage to stay in the five and will now play off against traditional rivals Coorparoo at Coorparoo next week in the sudden death elimination final.

The Coorparoo Kings were beaten by Aspley yesterday and will also be looking to regroup for their encounter with the Tigers.

The Tigers will be looking for plenty of support for this must win game in Brisbane with the other finalists all from the Sunny coast in Maroochydore on top, followed by Noosa and Caloundra. Caloundra accounted for Noosa last week in a thriller while Mayne recently beat Caloundra making for an interesting final series.