Jake Magill – a lesson in positive mindset and resilience 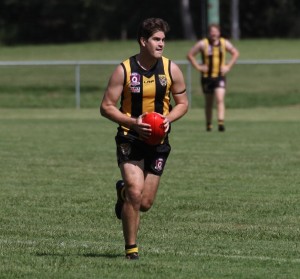 The Mayne Football Club will be celebrating the 100th game of one of the most resilient Tigers to play at the club in many years when Jake Magill runs out against the Maroochy Roos this Saturday at the Den. In a touch of irony, Jake started his senior career at the Roos at just sixteen years of age after playing his junior career for North Shore on the Sunny Coast.

Jake came to Queensland as a football mad 10 year old with his parents settling on the Coast and it has been quite the ride since then. Jake was selected in the Suncoast Lions as a teenager playing several games before moving to Brisbane and joining the Western Magpies who were playing in the State League at the time.

The Tigers were a pretty young crew in 2008 under the mentorship of Mitch Ferguson who was always on the lookout for players who were pressing for their chances at State League level and might like a little senior experience. A casual conversation with the Magpies would change the trajectory of a young Jake Magill who was playing in the Magpie’s reserves to make his debut on loan to the Tigers in one of the most talked about games of the Tigers recent history. Jake recalls being picked up by Caleb Brown and Jimmy Gillett to be taken to the game at Palm Beach to play the high flying Lions who were a formidable outfit especially on their home deck. It proved to be a great day where Ferguson masterminded a come from behind win with the rag tag Tiger kids storming home to a fairytale win against all the odds. The experience was the catalyst that Jake needed to come over to the Tigers permanently in 2009.

Jake came to the Tigers as a clever mid field come utility player with a canny ability to accumulate possessions, use the ball efficiently and kick critical goals, all important attributes he has retained to this day.

The next few years saw the Tigers steadily build a list which would create some of the most exciting times the club has experienced in its 94 year history and Jake has played a significant part in all of that, however his personal journey has not been without some considerable misfortune and courage salted into the good times.

In round one of the 2013 season, once again ironically against his other old club the Western Magpies, Jake broke his leg three minutes into the game. After a significant operation with the insertion of pins and a plate which remain in place to this day, he was out for the season and a low chance of playing again, particularly at such a high level of competition.

In testimony to his courage and determination, with the 2014 pre-season underway, Jake worked as hard as he could to find the wherewithal to run again and get as fit as possible to give himself the chance to make the Tigers best team they had fielded in decades.

After working hard he was able to gain selection in the senior team a few rounds in and play thirteen games of the season including being a late selection for the Grand Final to be part of the first senior premiership for the club in 32 years. It was an amazing achievement under such adversity which gave him just reward for his will to overcome adversity.

The 2015 season saw Jake moved to play on the wing, a change which Jake, with typically dry wit, referred to himself as the slowest wingman to ever play for the club. He also recalls how good it was to be an outside player with the likes of Shaun Daly and Caleb Brown in the midfield, Luke Faulkner up front as well as so many other great players in the group. It was the chase of back to back premierships that everyone bought into and just wanted to be there that continued to inspire Jake to make the side again. This was no easy task with the depth of talent at the club at the time. It turned out to be one of his best years as he accumulated seventeen games in 2015 to once again make the Premiership team and celebrate the club’s good fortune.

The club’s pursuit of a threepeat in both senior grades in 2016 with Danny Craven and Clint Brunnenmeyer in charge was a great story to be part of for so many reasons. The club had a poor start to the year with a number of key players injured but things settled and momentum built as the year progressed. Jake was in and out of the senior side but still managed to play 12 games but importantly also qualify to play in the reserves. He was unlucky to miss out on senior selection for the grand final but was very pleased to still make club history and play an important part in the Reserves third premiership in as many years.

The last few years for Jake have been overtaken with important life events with marriage to Bec, the birth of their beautiful little girl Arabella, as well as his growing career. Jake is the General Manager Marketing for Healthia with well known brands My FootDr and iOrthotics, and a business relationship he is proud to be part of with fellow Tiger and Director of the business Dean Hartley.

And so, here he is with all of this going on, and despite a couple of years working hard in the reserves, he is playing good footy and presenting himself as always in the best manner, and he has earned his opportunity with several senior games over the last month to push to this important milestone.

It has been a wonderful and full story for Jake Magill to date and he is only 29. He tells us he is still enjoying his footy heaps and hopes to still be playing at 40. Everyone at the Tigers hopes that will come true and they wish him all the very best for his 100th senior game and for many more.

As is customary at the Tigers for a 100 game milestone, we have asked several of Jake’s team mates and coaches to put together a few words recognising this important occasion.

Loyalty is often an underestimated quality in this day and age.

Jake Magill has faced his own football mortality in recent seasons, first with his severe broken ankle which nearly ended his career, a triumphant return to play in back to back Senior Premierships and then a stint and another flag in the Ressies. Fatherhood and his career have also played their part, but Jake has soldiered throughout it all, taking the good with the bad and displayed tremendous loyalty and commitment to his Mayne Tigers.

Jake has been a fantastic servant of the Mayne football club. A skillfull player who has played in several senior premierships. I wish Jake all the best for his 100th senior game and look forward to playing many more with him. Well done Jake, a big congratulations.

Huge effort from Jake to play his 100th senior game for the Tigers and really happy for him to reach this milestone. Jake's loyalty and dedication to Mayne cannot be questioned and to make his way back from a serious broken leg in 2013 to play in 2 senior premierships and 1 reserves premiership is a testament to the hard work he has put in.

Jake was a great mentor for me in the 2015 premiership season. As an experienced wingman, he was always trying to help me improve as a footballer and person.

Congrats on the 100 games Jakey and good luck on the weekend!

I remember when Jake first started playing for Mayne on a permit from the Western Magpies and both Mitch Ferguson and myself thinking how is this bloke not getting a game for the Maggies? He was racking up 30+ possessions every game and dominating the clearances for us, and was certainly helping Mayne out during a tough season. Jake is a prolific ball winner and has always been fit and works hard on this to find the footy on the field. Was stoked to see him win a senior premiership with us as I know how hard he worked to come back from his broken leg, but even before that how brave the decision was to leave the Magpies at the time. He is now a triple premiership player with Mayne and solidifies his affiliation with the club on reaching 100 games. Great stuff Jakey!!!

Jake always thrives to get the best out of himself on the footy field. In all my time at the club he has barely missed a training session and apart from the serious leg injury he has barely missed a game. Jake will be the first to admit that he isn’t blessed with any recognisable speed, however he has the amazing ability to consistently rack up high possessions and goals throughout the year! A great resilient clubman that deserves his name in the 100 game club!

Congratulations Jake on 100 games for the Mayne Tigers, your perseverance and commitment has paid off.

All the best for Saturday mate.

Congrats Jake on 100 games for the Mayne Tigers. I would always find him chatting up my old man in an attempt to have a few extra stats added to his column! A great bloke to have around the club, good luck on Saturday mate.

One of the best debuts for the Tigers in recent years - played on permit from the Magpies and racked up 30 touches playing in a back pocket against PBC down the Gold Coast in a boilover! A real ball magnet who has carved out a terrific career at the Tigers including 2 senior premierships. Congratulations on reaching the ton Jake.

Jake has been a loyal tiger since he first joined the club. His recovery from a broken leg to become a valuable member in premiership sides is a remarkable feat and a testament to his courage and persistence. I have always admired his uncanny ability to find the footy and kick a goal in crucial moments. Congratulations Jake on your 100th game!

Great effort on 100 games Jake, Ball magnet who has always racked up high possessions and put the ball to good use.

I remember Jake coming across from the Western Magpies on permit many moons ago and what was evident from the very beginning was the ridiculous ease in which he accumulated possessions, it wasn’t uncommon to see Jake trying to scrub the red leather stains off his hands post game. It was a great get for the club when Jake decided to make the move permanently and he became a fixture in our midfield for many seasons. He showed great resilience to overcome a badly broken leg and was a big contributor to our success through the premiership years. One of the great guys to have a beer with, he’s even proven his commitment to the club by running head on into a taxi (with the taxi coming off a clear second best) and earning the nickname Uber (the taxi killer).