Pumas too strong at home 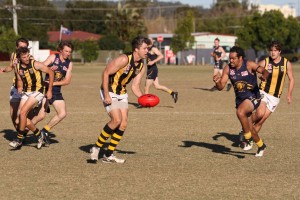 The Springwood Pumas season might be over next week however they showed yesterday that they could have been a real problem for the final five had they made the cut. The Tigers have a terrible record at Lowe Oval and yesterday was just another example of the Pumas dominance on their home turf.

In another week of selection challenges the Tigers put together their best available side but it was always going to be a tough encounter against quality opposition.

The Tigers kicked the first goal of the game and looked to be ready to go but the Pumas responded quickly with one of their own. A long range set goal from Corey Massingham and it looked like it could be a shoot out start however the Pumas settled well with Rhan Hooper dominating possession up forward setting up a number of scoring opportunities to give them a two goal advantage at the first break.

As is often the case at Lowe Oval, the breeze came up strongly in the second term. This provided a significant advantage to the home team with local experience also a factor operating in these conditions. The Pumas were able to kick away in the second quarter however they could have made the Tigers really pay but for inaccurate kicking. The Tigers battled hard kicking into the breeze only mustering one goal for the period to go into the main break almost six goals in deficit.

Once again it was the Tigers defence doing a power of work with Fraser Thompson and Dean Hartley leading the way under enormous pressure.

The Tigers regrouped at half time and came out a much invigorated team to dominate the next thirty minutes. Sam Nevins was on top of the rucking contests to put Ryan Eyles into attack mode and drive the Tigers forward. As usual the ever reliable Jack Collings and Sam Paterson were in and under getting plenty of hard ball against the big bodied Pumas ably supported by Jake Warren.

Whilst they dominated possession peppering the goals with sixteen scoring shots, the Tigers recorded only four majors. A move of Dean Hartley to the forward line gave the Tigers another strong focal point giving Kane Tyson some breathing space to kick two important goals for the quarter. The Tigers almost erased the deficit however the Pumas were able to sneak a late goal to maintain a two goal advantage with the strong breeze to bring them home.

If the Tigers had kicked straighter things could have been different. The Pumas in turn took full advantage of the breeze in the final term to kick five goals with veteran Greg Friis showing his usual class. Thankfully they were equally inaccurate kicking a further eight points while the Tigers could only find the goals on two occasions.

It was a valiant fight by the undermanned Tigers who worked hard all day but mostly paid the price for their slow start.

The final home and away round will be at the Den this week as the Tigers take on last years Premiers Maroochy who are looking like ominous favourites once again. While the Tigers have secured fifth place, their elimination final opponents and the venue remain in hot contention with Coorparoo and Caloundra jockeying for third and fourth place.