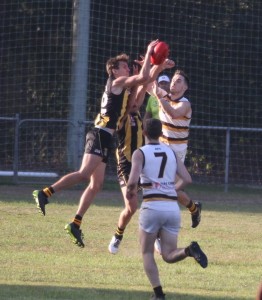 The Mayne Tigers secured their place in the finals yesterday in a hard fought local derby with the Aspley Hornets at the Den.

In a very tough week for the club where club champion and Vice Captain Zac McLean sustained a season ending injury at training on Thursday night, the team banded together to make sure that they brought home the points this week. McLean will need surgery this week on a broken ankle which will hopefully see him recover in quick time. He has been playing extremely well this season and is a key player for the Mayne Football Club.

The Tigers started strongly putting pressure on the Hornets from the very beginning however their inaccuracy in front of goals left the door open for a hard fought contest. Even with eight scoring shots to one the Tigers only took a two goal lead to the first break.

Jack Collings and Ryan Holman were welcomed back this week bolstering the midfield and they both played important inside roles for the Tigers.

Jamie Ivers was once again flying high in the Tigers forward line as well as in the ruck as he continues his rapid ascent to the Tigers key tall role. Ivers has been a revelation this year playing with maturity and controlled aggression.

After a surge by the Hornets early in the second quarter where they almost drew level with the Tigers, the home side steadied the ship and kicked away strongly thanks to two quick goals from Kane Tyson who was also one of the best players yesterday.

After the main break, the Tigers should have kicked away with a very strong performance in the midfield providing a dominant proportion of possession however the peppering of the scoring zone resulted in only three goals but another six points.

Ryan Eyles followed his strong performance last week with another bullocking effort in the midfield to provide the Tigers with plenty of ball.

By the end of the third quarter it seemed that the Tigers had secured the win, however the Hornets never gave up pushing their credentials right to the final siren. The quarter saw the ball swing between the half back lines as both sides defences had their opportunities to shine. Jordan Morrison and Fraser Thompson were terrific for the Tigers with strong marks as well as run and carry to launch numerous attacks all day while Dean Hartley was solid as usual.

The Tigers will play Springwood away next week in the penultimate round before finishing the home and away season at home against Maroochy.