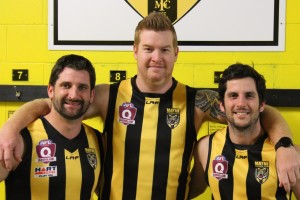 Club Historian Bob Gower has been laid up recently with another significant operation on yet another joint which needed to be replaced thanks to years of football and basketball wear and tear coming home to roost. In the wee hours of the morning, kept awake by pain and discomfort, he was musing about club history, people and records when he started to ponder on the playing records of some of the lads he has seen grow up with the Tigers.

After some collaboration and musing with fellow Mayne Tigers numbers tragic and club President, Russell Ditchburn, a set of figures came out for three young men who have played defining roles in the Mayne Tigers for over 900 games collectively through the Mayne Juniors and Seniors. In addition to extensive service for the Mayne Juniors, each of them have played in the Seniors, Reserves, Colts and more recently the Third grade side which started in 2015 as work and family commitments restrained their participation to the new competition but kept them in the game and the club.

Tom Ditchburn, Chris Azzopardi and Christian Rollman came together as students at Virginia State School and then Earnshaw College and commenced their love of football at the Mayne Juniors. They might have started playing footy at different times but ultimately they have charted a similar course with the club which has seen them play an integral role over a very long period.

This week the club will acknowledge and celebrate Chris Azzopardi’s 300th game in Black and Gold across all the grades commencing in under 12’s. He will play this Friday night for the Mayne Thirds at Nundah where it all began in a night certain to bring back many happy memories for him and his mates. Azza, as he is known to everyone played 96 senior and 35 reserve grade games in his 300 before study and work commitments left him perilously close to the major senior milestone but he has since enjoyed several years getting the Thirds underway, winning the Thirds Best and Fairest in 2016 and being a part of their 2017 Premiership success encompassing a further 54 games.

Tom Ditchburn started playing when he was six and is now in his 25th season for the Tigers, an amazing record and commitment to one club and one he and his family is very proud. Tom, or Ditchy as he is referred, will play his 390th game for the club the following Friday night. After making his senior debut at 17 in 2004, Tom has played 23 senior games, 113 reserve grade games and 57 games for the Thirds in addition to a further 196 junior and colts games. There is little left to do for Tom having performed as Reserve Grade Captain from 2010 to 2013, being awarded the Graham Walters Reserve Grade Best and Fairest and Peter Ives Players Player in 2009 and 2011, Reserve Grade Premiership in 2014, Thirds Best and Fairest in 2015 and Thirds Premiership Captain in 2017. He has also performed an Assistant Coach role for the reserves in 2014 and 2018 and the Thirds in 2017 and 2018.

Tom was also a member of the club management committee from 2009 to 2013 and was awarded the Jack Kennedy Club Person of the Year in 2010 for his all round efforts on and off the field. Tom’s younger brothers David and Sam also played over 300 games each for the Tigers and with two young sons we might just see a fourth generation of Ditchburns making a contribution at the Tigers.

Christian Rollman, a passionate rugby league junior, was convinced to join Tom and Chris at the Tigers in under 14’s along with a number of other Earnshaw College mates to get the Tigers up and going that year. Christian, or Crum to his mates, would not have imagined that he would go on to play 226 games for the Tigers including 10 senior, 110 reserve grade and 22 Thirds games on top of 84 juniors and colts games. Christian also served as a committee member for the club for several years.

The club has enjoyed considerable success in recent years thanks in no small part to the dedication support of these young men, initially in a period when times were less prosperous and a certain amount of grit and spirit was required both on and off the field. It was certainly fortuitous that these three boys came to the Mayne Juniors all those years ago.

The three mates came together this week for a photo and a chance to reminisce about the good times they shared. There were plenty of good memories from their junior days when life was care free and footy was all that mattered and with over a dozen school mates in the side, the banter would never end.

The club wishes Azza all the best for his 300th appearance for the Tigers this Friday night and thanks him, Tom and Christian for their considerable dedication to the Mayne Tigers over such a long period.