Tigers hold on against Pressing Panthers 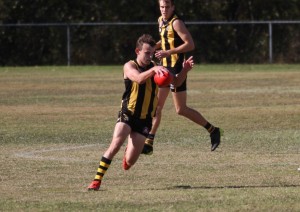 The Tigers carried on their confident approach from last week’s second half against Noosa into their clash with third placed Caloundra to hold out for a morale boosting one point win at Mott Street yesterday.

Despite five changes to last week’s lineup and missing eight of their regular senior players the Tigers kicked to an early slender lead and held it for the entire day in an enthralling game which could have gone either way in the end with Caloundra Panthers never letting up.

The Tigers young guns filled the gaps with tremendous maturity and never missed a beat in the pressure cooker of the last quarter. The margin was never more than two goals for the day but with the Tigers holding on to a slender seven point margin with minutes to go and that extra point could not have been more critical.

The defence of the Tigers has been a feature for many seasons now but the work under pressure yesterday was defining as the new look Tigers earned their stripes under fire under the tutelage of Dean Hartley and Todd Banfield. Fraser Thompson was once again composed and effective at the last line with telling marks and spoils at critical moments.

The first quarter set the scene for an exciting contest with nine goals and only one point scored at frenetic pace with both sides using their pace and direct play to maximum effect. It was as good an example of the game as you could hope to watch at any level. The Tigers held a lead of seven points at the first break as both sides sucked in as much air as possible to prepare for the next stanza.

Ryan Eyles has been a courageous player for the club for several years now but it was his turn yesterday to lead the Tigers midfield with his customary attack on the ball and bone crunching defence when required. Zac McLean also gave the Tigers another reminder for his class as he opened up the game with critical composure and incisive delivery.

Tall Tiger Jamie Ivers came off the leash yesterday with a first class display at full forward to kick four important goals but also play a critical role when in the ruck.

The Tigers welcomed Kane Tyson back into the top side after two very good performances in the twos after a long break and he made the most of the opportunity to kick two goals and provide another focal point up front.

Jake Warren was a strong contributor in the small man department for the Tigers before he was taken from the ground after a heavy collision.

In the end the Tigers held on to that solitary point after the Panthers scored their final goal to narrow to the smallest gap.

Three rounds to go now and the Tigers hold fifth place with Aspley, Springwood and Maroochy in the run home.