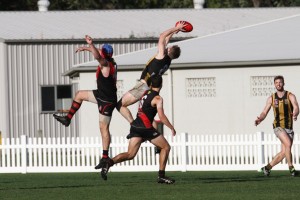 It was a day for milestones and ceremonies at Leyshon Park yesterday, as the Tigers honoured Dean Hartley for his 100th game, Clint Brunnenmeyer for his 50th and young Andy Tydink made his debut in a game he will remember forever. The Tigers took on the Yeronga Devils who have had one of their toughest seasons for many years but whether it was the fervor of the occasion or the Devils wanted to make a point, the game didn’t start according to the script.

The Devils got out of the blocks quickly to kick three of the first four goals of the game to have the Tigers on the back foot. However, the experience in the group came to the fore as the Tigers steadied proceedings to kick the next three and finish the quarter in a respectable position.

The Tigers Adam Mueller had been one of the players to make a difference in the first term however he wasn’t able to take any further part in the game after succumbing to injury. It is hoped that he might be back after the bye as he has been a crucial player for the Tigers this year.

It was pretty much Tigers all the way from this point on as they restructured slightly and gradually took the ascendency to win the second quarter and hold the Devils scoreless even though they defended grimly and gave their all on a very heavy and slippery deck.

Jack Collings was once again terrific on the inside putting his body on the line for valuable possession for the Tigers while Zac McLean’s rising form took him to new heights for the season with a dominant effort in the middle and up forward to also record three goals and assist in many others.

In a quarter where the Tigers have often failed to put teams away despite having the momentum, it will be pleasing for the coaching staff to see their charges put a team to the sword with a seven goal third term while holding the Devils to a miserly one point as they took the fight well away from them.

As he has done so many times over is career, Cory Massingham stepped up to take the lead position up forward and provide the necessary contest. Massingham kicked three for the day while also contributing to others.

It was a breakout day for the wingman as well with former Mayne Junior Jessie Gough getting plenty of the ball and take full advantage while Jake Warren also had a day out.

But it was Dean Hartley’s day after doing his job down back in customary fashion he was rewarded with a spin up field. He has had this opportunity in the past and as usual he makes the most of it to remind everyone he isn’t just a tough defender. The Devils backmen who had already seen enough of the black and gold also got to see what a tough defender can do in attack as Hartley crashed the pack on several occasions skittling players in all directions while he took one hanger and finished it off with a goal to send his team mates into raptures.

The representative game this week will give the Tigers a welcome break before they take on Noosa on the road the following week.