Tigers Back in the five 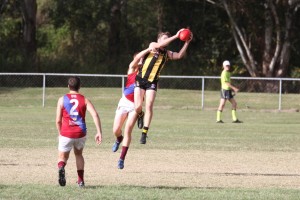 It wasn’t pretty but the Tigers got the job done overcoming a determined University Red Lions in their round 12 encounter at the Den yesterday.

The last time these two sides met it was a dour affair on a slippery deck with low scores and congested defence being the order of the day and yesterday was looking very much like a video replay despite drier conditions.

The Tigers looked like they had the measure of the students but could not put them to the sword with terrible kicking for goal crippling their chances of an easy afternoon.

To their credit, University battled hard all day pressing the Tigers into a defensive crush creating turnovers and a tense ebb and flow which had the small but enthusiastic crowd locked into the contest all day.

The Tigers were the first to score a goal half way through the first quarter but with six minor scores to their credit before the quarter finished the two sides were only four points apart at two goals each.

The Tigers had missed several set shots to keep the contest well in the balance while University made the most of their opportunities. Tigers small forward Corbin Sellen kicked both of the majors for the home side to keep things somewhat respectable.

The Tigers defence has been miserly all year and yesterday was once again a masterclass with Jordan Morrison, Dean Hartley and Todd Banfield leading the way with composure.

The perceived pressure on the goal kicking continued into the second quarter with both sides only able to record two goals as the game continued on its way with congested defence and zones the order of the day.

The pressure was taking its toll with both sides making skill errors at critical times.

The Tigers forward line was working very hard though to make the most of their opportunities with Adam Mueller presenting and marking strongly while Corey Massingham was also providing an alternate target.

The Tigers leaders in Jack Collings and Zac McLean were in the thick of things all day with Collings in an under and McLean marking everything and kicking long but it wasn’t until the last quarter that the Tigers really broke the game apart to finish strongly.

While it was tough to watch at times, it was a gripping game which the Tigers were very pleased to win.

The Tigers move back into fifth place on the ladder with this win after Springwood fell to Burleigh. The congestion in the middle of the ladder continues with Caloundra, Mayne, Springwood and Aspley all jockeying for the last two spots and all needing precious wins to stay in touch.

The Tigers travel to Yeronga next week in another must win opportunity.