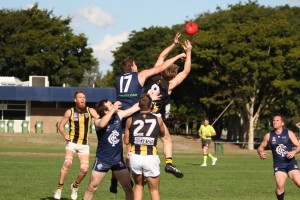 The Tigers and Kings fought out an epic battle in their season return match yesterday at Giffin Park with the home side finishing just that bit stronger in the end.

The Tigers won the Anzac Day clash two months ago but in form reminiscent of 2017, the Kings got their revenge in the return game.

The Coorparoo faithful from times past were in attendance to watch the two clubs continue to forge the rivalry which defined them back in the 1960’s when they were the benchmark of that era.

The Tigers got out of the blocks in quick time with four of the first five goals of the game only to have the Kings fight back before the end of the first term to lock the scores up at 28 apiece.

The Tigers looked to be on song with four of their forwards sharing their four goals and the midfield getting some quality ball from the Tigers ruckmen Dan Schmidt and Jamie Ivers.

However the Kings momentum into the last minutes of the first term carried through the second term with a dominant period enabling them to stretch out to a three goal lead at the main break with only Josh Griffiths hitting the scoreboard for the period. It wasn't that the Tigers weren’t getting the clearances they needed, it was the defensive work of the Kings that gave them the rebound to forge ahead with the Kings Brandon Stewart particularly damaging.

The half time break was a chance for the Tigers to regroup and challenge the momentum against them which they duly did over the next half hour of the third term. The Tigers responded with five goals to one on the back of individual goal kickers once again in an equally dominant display to set up the game for an exciting finish.

The Tigers had clawed their way back to a four point lead and along the way created some real feeling in the contest between the two sides as they went to their huddles with the umpires trying to cool proceedings.

A fired up Kings came steaming out of the break with five straight goals in a withering onslaught of centre clearances which caught the Tigers off guard.

Despite multiple rebounds out of defence with tremendous work from Dean Hartley and Sam Paterson, the Tigers open forward line was picked off too many times to enable them to score until the 24th minute with a runaway goal to defender Jordan Morrison.

In the end the Tigers were able to kick three goals but time had run out for them to overcome the Kings lead.

It was another very entertaining game which, just like the round one encounter, could have gone either way.

The Tigers slip back to sixth position and will line up against the University of Queensland this coming week at the Den.