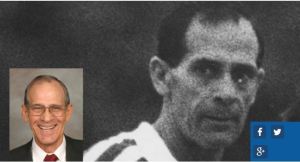 The Mayne Tigers would like to acknowledge the passing of Queensland Umpiring Legend and AFL Hall of Fame Member Tom McArthur who passed away recently.

Past Players and Supporters of the Mayne Tigers and all QAFL clubs of the 1950’s, 60’s and 70’s will have many cherished memories of Tom’s umpiring exploits during one of the most successful periods in Queensland Football. In a time when umpires did their job as a lone hand, Tom MacArthur was a name respected by all who knew him, even if they didn’t always agree with his decision.

Tom was a regular attendee at reunions for the Mayne Tigers players of the early 1960’s with former premiership player and past President Noel Best recalling many enjoyable times sharing memories of their early days.

The service is open to all and it will be great to see the AFL Queensland umpiring family in attendance and showing their respects to one of Queensland Greatest ever umpires.

The following tribute to Tom McArthur’s incredible service to Queensland football has been posted on the AFLQ website.