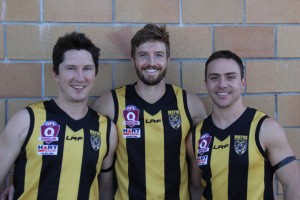 Ryan Holman made his debut for the Mayne Tigers yesterday at Burleigh bringing together three mates who last played together in the Goondiwindi Hawks Under 12’s premiership seventeen years ago.

Jack Collings and Corbin Sellen could not have been more happy to see their lifelong friend join them in what is expected to be an exciting combination for the Tigers for several years to come if yesterday’s performance is anything to go by.

Ryan made his debut mid season for the Tigers after making the decision to come across from the Aspley Hornets as part of a life change exercise with the imminent birth of his first child and new work arrangements. He has been a stalwart in the Hornets combination for the last five years but it was time to make a change with nothing left to prove at the higher level. Travel and the additional training load will be changed for the responsibility of his growing family.

All three of these young men have nothing left to prove having enjoyed premiership success over the years in what have been stellar careers in community football while Ryan has also performed at the NEAFL level for many years.

Ryan played his 100th NEAFL game last year after crossing from Morningside to the Hornets to follow long term mentor and Queensland coaching legend John Blair. He accumulated three premierships with the two clubs after six grand final appearances. After being selected in the 2009 Queensland team, Ryan was considered a high prospect of making AFL level and while that didn’t come his way, he has been a consistent and highly regarded performer at the NEAFL level over this long period. He was also awarded the Syd Guildford Medal in 2009 for the best player in the QAFL as selected by independent observers.

He joins Jack and Corbin who both reached their 100 game milestones for the Mayne Tigers in recent weeks with each of them also being multiple premiership players for the club. Corbin is a triple premiership player with the Tigers while Jack has two to his credit missing the 2014 success due to injury. Both of them are now prominent leaders in the club in every sense with Jack also taking on the Club Captain role in 2017 and following that up with the Keith Beavis Trophy as the Club Champion in the same year.

The two mates who have been fixtures in the Tigers senior side since 2012 having forged a lifelong bond on and off the footy field and after seeing the three former Goondiwindi Hawks coming together yesterday, all seems to be very right in Tigerland for a while to come.