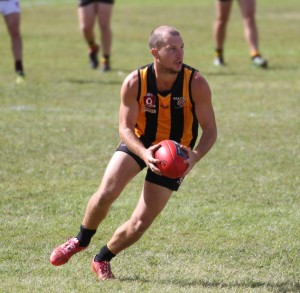 The Mayne Tigers will celebrate the 100th reserve grade game this Saturday for the ultimate team man in Scott Webber who came to the club as a rugby league convert who hadn’t played a game of Aussie Rules until his 22nd year.

Scott was a determined young man who was very keen to learn his newly adopted game, recalls his then coach Russell Ditchburn. Ditchburn remembers spending a few intensive sessions on Webber’s skills before he was on his way as a rugged defender with considerable courage and a determination to improve.

It is full credit to him that he runs out on Saturday as only the fourth Tiger to play 100 games in the reserves for the club in well over 20 years.

In an amazing record he has also developed into a team leader who played an integral part in three consecutive premierships for the reserves between 2014 and 2016 playing as a midfielder. He was the very proud Premiership Captain in 2016 and shared that leadership role again in 2017. Although not of large stature, he is renowned for his courage and willingness to stand up for his team mates when required.

Scott was rewarded in 2016 with the Peter Ives Player’s Player award in the Reserves, a considerable and fitting honour for someone who has worked so hard to become the player he is today. He also was awarded the Tiger’s Most Improved in 2014 and the Most Courageous in 2015, an indication of his continued rise to the top of his group.

In 2017 he was called upon to play in the Seniors to fulfil an important team role for an extended period as the club worked through a new game plan and the transition of the changing senior group.

The Mayne Tigers hold him in very high regard as a great team person and a wonderful example to all young sports people as to what is achievable if you are prepared to put in the effort and accept the guidance and assistance of the people around you.

The Mayne Tigers wish Scott Webber all the very best for his 100th game this weekend and hope that there are many more to come.