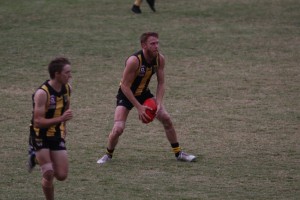 The Tigers put themselves back on the winners list yesterday outlasting a determined Springwood Pumas in a rain soaked afternoon at the den.

Both the Tigers and the Pumas came into the game with a long injury list however this was a game that both sides needed to win to stay in touch with the competition leaders as we head into the middle of the season.

The Tigers were missing all of their talls with Sam Nevins, Dan Schmidt and Jamie Ivers unavailable however they were well pleased with the effort of nineteen year old Kyle Henry who shouldered the ruck duties for almost the whole day in a courageous effort.

Sam Paterson once again gave the Tigers everything in yet another determined effort in the middle sacrificing his wiry frame for the cause to be the club’s best while Captain Jack Collings shed blood once again in another selfless display as he led the Tigers to victory.

The Tigers defence held strong all day with Jordan Morrison putting in a very composed display against the quality of Rhan Hooper. As usual the backline worked very well together with Dean Hartley, Fraser Thompson and Todd Banfield also keeping things under control to provide the platform for the Tigers success.

There was barely more than two goals separating the two teams all day with the first half providing an entertaining display of wet weather skills. The Tigers held a handy two goal lead at the main break but it was always going to be close as each side tried to make the most of their chances.

The Tigers looked to have the Pumas measure in the third term as they slipped away to a slightly larger lead only to concede two late goals in the term and hold a ten point buffer at the last change.

The work of Josh Griffiths and Adam Mueller supported by Nick Holleran to keep the ball in the Tigers half was critical to the win.

The Tigers went back to the well again putting powerhouse veteran Andrew Housego into the ruck to provide the essential drive needed in the middle for yet another important game for the club.

The Tigers meet ladder leaders the Noosa Tigers next week at home in the Annual Reunion Day game. The Tigers will recognise the 1958 Premiership team with a number of that legendary group still going strong and looking forward to the day.

All Tigers are invited and encouraged to come along and support the 2018 teams in what has become an important social day on the club calendar for all Tigers of old and new.

The Tigers will also award the Mick Nolan Medal for the Best and Fairest Tiger on the day on what has become a much cherished award each year. The inaugural award was won by Corey Massingham in 2009 with Sam Paterson and Caleb Brown each winning the medal twice since then.