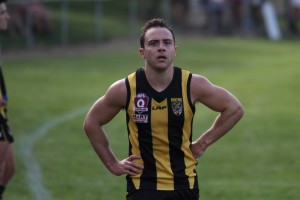 One of the Mayne Football Club’s most hard working and tenacious stars will play his 100th game this week.

Corbin Sellen started his senior career at the Tigers with his first game in 2008 as a talented 18 year old from Goondiwindi. He recalls it was against Maroochydore but wasn’t too sure if we got the win that day. However, he does say that being presented with his jersey on that day was a huge honour he can’t forget. He played half a season that year and to his regret left to pursue other things. However, much to the Tigers good fortune he missed his footy too much thereby returning in 2012 joining his lifelong mate Jack Collings.

Corbin has been a fixture in the senior team ever since, quietly going about his business providing incredible pressure on opposition players with his hard running and effective tackling. He has consistently led the kill count for many years providing the defensive forward pressure which has contributed to the Tigers three consecutive premierships during his time. While he has been a terrific pressure player, his finish with the football has been a consistent feature as well with 93 goals to his credit so far when playing in the small forward role or around the ball.

Corbin has plenty of fans in the club hierarchy who enjoy the way he goes about his footy playing in a way which belies his stature.  He is also a true gentlemen who is much respected by all at the Tigers and not just for his considerable football prowess.

We caught up with Corbin recently to ask him a few questions about his time at the Tigers.

You’ve played under a few coaches at the Tigers over your time with the club, who has been the one that you enjoyed playing under the most?

It has been hard to nominate my favourite coach as they are all so different, however Mitch Ferguson gave me my first senior game at Mayne and I loved playing under him. Tactically I don’t think there is many better.

Shaun Daly was a huge influence on the way I played. I think he loved the non-flashy stuff and I think I fit in that category. He never minded how many touches I got or goals I kicked, he was more interested in the tackles and team stuff.

Danny Craven and Clint Brunnenmeyer were huge motivators and winning the third flag from how we started the 2016 season is a huge credit to them. Their research into other teams played a huge part in how we prepared each week.

Who has been the most influential player in making you the player you are today?

Played with a lot of great players at Mayne in my time but a special mention to Caleb Brown. He took me under his wing both on and off the field when I first got to Mayne. He would drive me to training and games without fail and was always so giving with his time to make me a better player.

You have certainly been fortunate to play with the Tigers during such a successful period, are there any special memories you have which stand out?

Many memorable moments like the debut and three flags but I would say the game that sticks out the most is the game Mitch Ferguson labelled ‘The Sting’. Round 1, 2012 on a rainy Sunday at Surfers Paradise. My first game back since leaving the Tigers in 2008 and a winless 2011 season for the club. One of the toughest games I have been a part of and winning by 4 points against big odds (made even bigger after losing Caleb for flying the flag) was one of the best feelings I have had on the footy field.

Winning the premierships with guys like Jack Collings, Bill Stephens and Zac McLean will always be something I will look back on fondly when my playing days are over.

We know how well and how hard you prepare however we have seen you limping from the field after some monumental collisions from time to time, how is your body standing up to the weekly grind of senior footy at this level?

I have had a few injuries that have cost me a few games but being engaged to the club physio Amanda is pretty handy to have on my side. She has certainly fixed me up plenty over the years and I owe a lot of my games to her.

Three Premierships is a tremendous achievement which can only be dreamt about by most sports people, how does it feel to be part of this special group of players?

Being a triple premiership player for the Tigers is a huge honour. I certainly owe the third one to Danny and Clint as I hurt my ankle very early on in the season and didn’t play another senior game until the Grand Final. The fact they trusted me to play a role and get through the Grand Final is something I’m very proud of.

The Mayne Tigers wish Corbin all the very best for this milestone and look forward to many, many more.

We asked a few of Corbin’s team mates what they thought of him on the eve of his 100th game.

Corbin would have to be the most tenacious player I’ve had the pleasure of playing footy with! I’ve never played with someone who would rather lay tackles than get a kick of the footy! He gives his all week in, week out, and he’s more than happy to cop the flack at home when he tells Amanda she is wrong and he is playing footy no matter how injured he is! Great work on 100 games mate!

Playing 100 senior games is a great achievement, particularly for a bloke who "retires" at least 4-5 times per year. There are probably not too many small forwards who honestly prefer chasing, tackling and just cracking in more than kicking goals, but Corbin is one of them. Always does the team things and plays his role to perfection and was one of the most underrated players in the 2014-2016 premiership teams.

It’s been great to play most of my footy between under 12s and now with you mate and looking forward to many more games, premierships and post-game text messages telling me your retiring!

I think it’s an awesome achievement to reach that level and the way he plays is indicative of the way that we would want all Tigers present and future to play. The way he attacks every contest is something that I know inspires me and I’m sure all players at the club.

I still remember his debut up at Maroochydore where he kicked 4 goals as a small forward ... remarkable effort!! He has kicked some freakish goals over his 100 games, but what makes Corbin special is his relentless tackling and pressure and his superb 1-on-1 contests. He is a teammate I always loved playing alongside and he always put the team first. Loves a bit of niggle too!!! Very happy to see him join the 100 game club at Mayne.

Corbin ‘Dane Swan’ Sellin has gone from not knowing my name until 2017 to one of my best mates. Although we didn’t say a word to each other for 3 years, I always admired the intensity and work ethic Corbin plays with. Corbs has a very underrated sense of humour and puts himself in the top three funniest blokes at the club. Corbin will be the first in the ice baths after a game and the first through the door at a club function. Congratulations on 100 quality games mate, you’ve made the Rat Pack proud!

Corbin has set the benchmark as the best pressure player at Mayne for the last 5 Years. His tackles, miraculous goals and celebrations have been something I’ve always admired. Good luck on the weekend and congrats on the well deserved 100.

Although he might be last in the line on team photo night, he definitely doesn’t fear anyone on the football field! Unbelievable competitor who loves pressuring the opposition and hitting the scoreboard. Glad to have played with him and not against him!