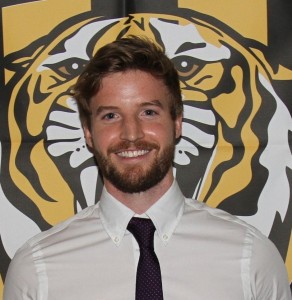 Club captain Jack Collings will play his 100th game for the club this Saturday capping a stellar period in this young man’s ongoing rise through the ranks of the Mayne Tigers significant list of heroes.

Jack came to the Tigers at the beginning of the 2012 season as a talented 21 year old recruit who had been working hard at the Morningside Panthers. The Tigers had been watching him for several years as the young cousin of club legend Caleb Brown. He had played a few games on permit and the Tigers were very keen to secure the young man’s signature.

Jack made an immediate impression on the club’s leaders as a serious and dedicated player who, just like his cousin, did everything possible in his preparation and it was clear he was going to play an important part in the Tigers’ future.

The Tigers have been able to use Collings as a hard running midfielder with defensive as well as attacking qualities. He is quick to acknowledge his development through his early days at the club were fast tracked by the extensive talent that surrounded him at the time and over the next few years with names like Housego, Brown, Ferguson, Faulkner and then Daly on the paddock around him as well as many others who would share in premierships in a freakish period for the club.

A season ending injury in 2014 as the unbeaten Tigers were roaring towards the finals was a terrible blow to the young Tiger at the time as he watched on from the sidelines for the remainder of the season. He had sustained a debilitating back injury which could have ended his career but he is made of stern stuff as those that know him can attest. The Tigers broke a 32 year drought to win the premiership without him but he was only more encouraged to make a comeback with so many people in his corner, not the least his very supportive family and friends.

The Tigers went on to win the 2015 premiership with Jack playing a critical role in the back to back season, capping off a tremendously courageous comeback. Whilst this was a wonderful experience, Jack cherishes the 2016 Premiership as the one he thinks was the most defining, as the Tigers had a terrible start to the season with injuries to numerous players, only to fight back hard and overcome the Maroochy Roos who had been the form side for the entire season.

The Tigers are now in a rebuild phase with a number of key retirements to long serving stars. As a result of the high regard that the club and his teammates hold him, Collings is now in his second year as the Tigers Club Captain, taking over from his cousin Caleb. The role in recent times has only had two incumbents in the previous sixteen years with Andrew Housego holding the position for the prior 11 years before Brown’s five year spell so it was always going to be a huge honour, one which Jack holds very dear.

In his first year as Club Captain, Jack was awarded the Keith Beavis Club Champion Trophy in well deserved recognition of a tremendous season leading the Tigers through the beginning of the renewal period.

In amongst all of this, Jack has also joined the Tigers management committee and is helping to shape the destiny of the club.

The Mayne Tigers wishes Jack all the very best for his 100th game and will look forward to many more.

The following tributes have been penned by Jack’s teammates in recognition of this important milestone exemplifying the regard he is held at the Tigers.

Jack Collings is a true clubman and super footballer. His dedication to the team and the club cannot be understated. Every game I have played with Jack I know he will give everything he can to ensure success for the team. It has been an honour to play with Jack and look forward to playing his 100th game alongside him. The exciting prospect is he will play at least another 100 more for the mighty Mayne Tigers!

To play 100 games at any one club is a true show of loyalty and that word loyal would sum up jack pretty well perfectly! Not only to the Mayne Tigers but also family and friends! Jack stood out to me from my first ever training run with the club, being new and not knowing what was going on Jack pulled me into his group for the warm up and pointed out what we were doing so that I didn’t feel so out of place! He has evolved into a tremendous leader of the footy club and will no doubt in my eyes be the heart and soul of the playing group in the remainder of his playing years! Congratulations mate on your 100 games of work and determination!

Congratulations on 100 Games Jack. I have been very lucky to experience winning two senior premierships alongside you. I still remember you as being the first senior player to introduce yourself and make me feel welcome in my first pre-season at the club in 2013/14. Good luck on the weekend.

The ultimate professional! Goes above and beyond to prepare himself week to week.  Super consistent and is a great leader of the club on and off the field.

Obviously I’ve known him my whole life. He has always been an ultra competitive and a super athlete. His playing strengths are his toughness and ball winning ability, but when you combine that with his fitness he has really turned himself into one of the toughest players to line up against. What I’m most proud of though is, since coming to Mayne, he has really come out of his shell and become a tremendous leader of the club both on and off the field. So happy to see him play 100 games for this club!!!

Jack and I grew up playing junior footy together out in Goondiwindi. He was tough and courageous then and nothing has changed. Growing up he was a quiet shy kid, but always had my back on and off the field. He’s grown up to become a great leader of the Mayne Tigers Football Club, and is someone I still call one of my best mates. Congratulations on reaching your 100th game Jack. It’s a massive achievement (along with winning the under 12’s grand final for Gundy and the Mayne premierships), and I’m glad that I get to be part of another footy milestone with you.

Jack is the most committed and hard-working individual I have ever played with. He loves the club and gives up countless hours to ensure the club succeeds, both on field and off field.  It’s a privilege to be able to call this bloke one of my best mates & wish him all the best for Saturday.

Congratulations to Jack for his 100 games for the Tigers. Jack is probably the hardest working player in training and on game day that I have played with and his individual and team success over the last few years is very well deserved.

Jack's intensity at training and games is second to none. Any younger Tigers looking to improve their senior football will benefit from watching how Jack both trains and plays.

Jack has been the ultimate team man since he joined the club in 2012, giving his all in whatever has been asked of him. Playing through pain, filling the unselfish roles on and off the field and not expecting anything in return. The sort of player any team mate would want out there when it matters most, leading by example. Congrats on the 100 Jacko!