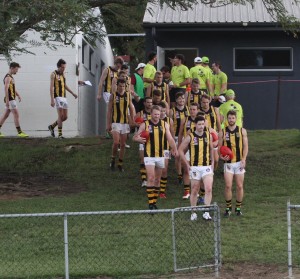 The Tigers were hosted at the Den yesterday by the UQ Red Lions with their home game changed to the Tigers digs due to delays with the opening of their new headquarters and they rudely took full advantage.

The Tigers were celebrating the 150th game for club favourite Corey Massingham however the game didn’t exactly go to the script.

The weather rolled in just as activities got underway to provide a nice glaze on the ground and the footy. Despite the conditions both sides tried to control the footy as if it was a much drier day resulting in a lot of ball on the ground and congested traffic albeit that both sides were pressing to each end of the ground.

The first quarter result told the story with both sides kicking a goal apiece and ruing some missed opportunities.

It was a day for the backlines with experienced hands like Todd Banfield and Dean Hartley once again showing the way with good reading of the conditions and applying simple strategies.

Fraser Thompson also did his utmost despite being very unwell to provide a rock solid defence for most of the day.

The Tigers were unable to add to the goal tally in the second term while the students managed one more goal for another twenty five minute arm wrestle to nobody’s real advantage. The Tigers had their second goal accumulated in behinds at this stage.

The Tigers forward line was bolstered by the inclusion of veteran Andrew Housego who did his best to apply the bodywork he is renowned for to support his younger team mates however the congestion around the footy was a major impediment to any opportunities.

The Tigers had made an extraordinary number of forward fifty entries to half time for their meagre return highlighting the defensive work of their opponents.

In the end the game slipped away as the UQ side nudged ahead and the Tigers were unable to respond despite considerable effort and endeavor finishing a low scoring dour affair.

The Tigers play Coorparoo at home next week in the Legacy Anzac Day clash which is hoped will draw plenty of old veterans from the two clubs who met for first time last year after a 24 year hiatus due to both clubs playing in different competitions.