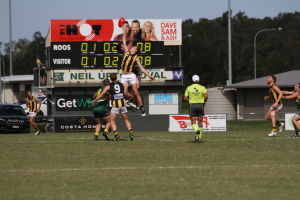 The Tigers came back to earth yesterday as they confronted the reigning premiers, the Maroochy Roos at Fisherman’s Road.

After an exciting start to the season last week, the reality of the competition that is the QFA Division 1 was on show as the Roos put on a clinical display to overpower a gallant group of young Tigers.

The Tigers welcomed back Sam Paterson and Fraser Thompson to bolster the side with their experience but the overall difference between the two teams in experience, strength and body mass was evident.

However, the Tigers endeavor and talent provides plenty of encouragement for the future as they competed strongly all day.

Young tall Jamie Ivers was the Tigers best as he competed in the ruck and around the ground in a polished display while veteran Clint Brunnenmeyer gave his all in the midfield willing his young team mates to compete and press on.

The Roos got off to a three goal lead to the end of the first break accumulating their lead in the red time of the quarter after the Tigers had held them very well for the first twenty minutes. The Roos major signing over the off season in power forward Mitch Schofield slipped off the leash to kick two goals while the Tigers had their opportunities in front of goal but could not convert when the need arose.

It was a similar story in the second term with only a goal apiece until the twenty minute mark as the Tigers defence held strong with Adam Mueller, Zac McLean and Todd Banfield working hard. Once again the Roos, through Scholfield managed to get an advantage in the last portion of the quarter to extend the lead.

The Roos came out firing in the third quarter to kick away strongly with three straight goals but the Tigers fought back well to stop the bleeding and run out the quarter with goals to young guns Dan Schmidt and Nick Holleran.

In the end the Tigers held the premiers goalless for the last twenty minutes of the game to show their growing maturity and never gave in.

The Tigers take on the University of Queensland this week at the Den with a late change to the draw due to ground availability.