New Look Tigers on the prowl 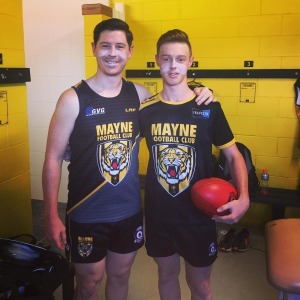 The Mayne Tigers statisticians were running for their record books this week with the selection of seven debutants for the round 1 clash with the Burleigh Bombers at the Den.

The Tigers selectors went for an all out youth approach after some very promising signs during the pre-season to select Jake Warren (Redlands), Nick Holleran (Mayne/Mayne Juniors), Kyle Henry (Mayne), Cody Caught (Mayne Colts/Mayne Juniors), Brady Athanasiov (Mayne/Everton Juniors), Lochlan Wills (Mayne Colts/Zillmere Juniors) and Mitch Bruce (Mayne Colts/Zillmere Juniors). The most pleasing aspect of this has been that all the boys are local talent with Jake Warren having already played senior football at Redlands.

After a review of the records, it seems that Cody Caught may be the youngest Tiger to make his senior debut for the Tigers for at least 60 years at the age of 15 years and 314 days. An exciting addition to this was that Cody was able to debut with his brother Corey Massingham who himself made his debut at 16 in 2005. Corey was making his 148th senior appearance for the Tigers.

The Tigers day could not have gone better to script as they went through a slow start to give the Bombers a head start at the first break with a couple of late goals.

However as the game wore on the Tigers kept pace with the Bombers and but for some wayward kicking they were well in the game at half time with only three goals the difference. The Tigers had kicked 8 points to squander some of the quality possessions they had generated.

The Tigers new look backline still boasted the experience of Dean Hartley, Todd Banfield and Zac McLean who all showed the composure that is required under pressure leading the new charges and it was a treat for everyone to see the mentoring was having a positive effect.

Up front it was a similar story with Adam Mueller taking some big marks to lead the way along with Jack Gartlan.

The third quarter was a very even affair with both sides kicking three goals as the Tigers maintained their contact. The three quarter time huddle was abuzz with enthusiasm and opportunity.

The last term was all about the coming of age of the young Tigers with the two young talls Jamie Ivers and Dan Schmidt giving the Tigers first use of the footy and driving the team forward. The Tigers dominated the final term to keep the footy locked in their half as the backline repelled everything that was thrown at them. The composure shown by the young team belies their age but provides plenty of positives for the long season ahead.

Jack Collings led his Tigers from the front all day and will be well pleased with the result.

The Tigers get on the road to take on reigning Premiers Maroochy next week in an exciting clash. Lets see plenty of Black and Gold supporters there for this one.