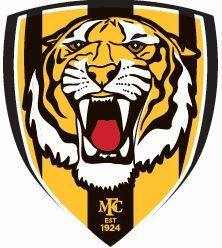 The Mayne Football Club acknowledges the passing of Norm Thomas on the 26th March 2018 at the age of 96 years.

Norm will be remembered as a long serving administrator of the Mayne Tigers during one of its most successful periods. He served as President from 1971 to 1974 and as Club Treasurer in 1978 and 1979 along with further significant periods on the Club Committee. He will also be remembered as a generous sponsor and employer of many young Tigers during an extended period.

A minutes silence was held at the Mayne Tigers Sportsmen's Lunch last Thursday in recognition of a great servant of the club and a friend to many.

Norm will be laid to rest at the Pinaroo Lawn Cemetery at 11.00am on Thursday 5th April 2018. All Members and Supporters, Past and Present, are encouraged to attend to pay their respects.

The Mayne Tigers wish to pass on their respects and condolences to Norm’s family and friends at this sad time.