Jack Collings to lead Tigers in 2018 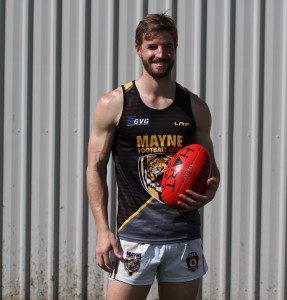 The Mayne Tigers launched their 2018 season at the Den last night in front of the Tiger faithful with plenty of promise for their second season in the QFA Division 1.

The formal part of the evening culminated in Coach Chris David naming the Tigers leadership group which will once again be led by reigning Club Champion Jack Collings as Club Captain. Zac McLean, the 2016 Club Champion was named as Club Vice Captain with the group also consisting of the experienced Sam Nevins and Ryan Eyles and Dan Schmidt coming on board to lead the younger Tiger brigade of which there are plenty.

The 2018 version of the Tigers is a wonderful mix of youth and experience with evergreen club stalwart Andrew Housego continuing on his quest towards 300 games for the Tigers, triple premiership players Dean Hartley and Tom O’Malley leading the Tiger defence as well as former coach Clint Brunnenmeyer providing for some formidable experience in the middle. Adam Mueller will also provide the versatility that every side needs as a key forward or defender while another triple premiership player in Corbin Sellen will once again set the game alight with his run, chase, tackle and finish.

Along with Dan Schmidt, the club will be looking to see young big man Jamie Ivers continue his development in the ruck and in some key roles.

The Tigers have been able to trial numerous young charges who graduated from the colts in 2017 through the pre-season competition with some impressive efforts from Kyle Henry, Lochlan Wills, Chas Van Lueewin, Mitch Bruce and Nick Holleran.

In his keynote address, coach Chris David spoke glowingly of Jake Warren, recruited from the Redland Bombers for the 2018 season to round out a strong group with plenty of growth ahead.

Josh Duffy introduced a range of quality Tigers also brimming with experience and youth to provide the Tigers with critical depth for a long season ahead while Murray Laing, fresh off the 2017 premiership winning performance set the scene for the Tigers 2018 year ahead after being promoted to Division 4. Murray outlined his plans for the Tigers to challenge the new competition as Friday night specialists in what shapes as another exciting year ahead.

Danny Brady introduced his 2018 Colts in his fourth year in this challenging role as leader of the Tiger Cubs. He rightly took pride in the number of colts, local boys, from the last three seasons who are now taking on critical roles in the open competitions.

After a tough 2017 from a numbers perspective the Tiger Cubs have 30 registered players this year with eighteen from Mayne, and a further twelve from the Everton Wolves and Zillmere Eagles. The club was very pleased to see so many parents of the young Tigers in attendance for the Season launch.

There are still opportunities for more players to join the open ranks so enquiries can be made with the following coaches.