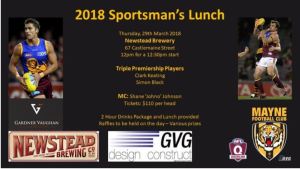 The Mayne Tigers will holding a sportsmen’s lunch as a key fundraiser to start the 2018 season off with a cultural beginning, at least from a sports lovers’ perspective.

The club is very appreciative of the support provided by the keynote speakers in Simon Black and Clark Keating, two of the Brisbane Lions’ greats and triple premiership players of the club’s most successful periods.

The day will be hosted by Mayne’s own Shane “Johnno” Johnson, a local footy legend in his own right and a 100 game player for the Tigers.

All Mayne supporters and Brisbane sporting fans are encouraged to come along to what will be an enjoyable event at the Newstead Brewery’s private function space at Castlemaine Street, Milton.

Details of the event are below with tickets able to be purchased online.

Fundraising:         Raffles to be held on the day with multiple prizes