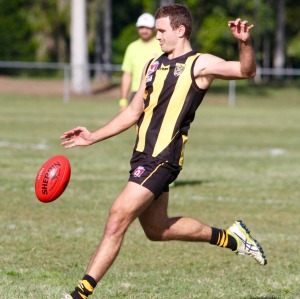 Training resumed mid January with an excellent roll up of players returning from the break in good shape.

Follow up testing was completed on a 2km time trial with 80% of the group bettering their times prior to Christmas.

Coach Chris David and his coaching group have made the major focus this pre season on skills with plenty of ball work and decision making drills.

David was very pleased with the enthusiasm and effort shown by all players which is certainly encouraging with not one player complaining or dropping out of any of the sessions to date.

The Tigers coaching lineup of support for Chris David provides a fresh new look for the group with Greg Conroy coming over from Redlands as a known associate of the Head Coach while Bill Stephens will add considerable experience to the management of the Tiger’s defence for 2018.

In other news Tom Ditchburn will take on the Assistant coaching role for the Thirds providing backup to 2017 premiership coach Murray Laing.

The full Tiger squad has been training together since starting in November but will look to break up after the pre-season camp being held on 24th February at Emu Gully, Helidon. All seniors and reserves players will be expected to attend the camp with all other players welcome to take part for their own development.

Coach David has been impressed with the large contingent of colts who have been attending training and fitting in well with the senior group. He has reported that there are certainly a couple of boys that will get an opportunity this year at either Reserve or Senior Level, which is a great sign for our club.