Pre-Season is underway for 2018 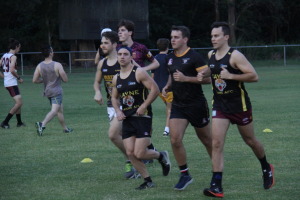 Training commenced last night at the Den with over fifty players hitting the track in beautiful conditions for this time of year.

The new coach Chris David set the scene with a detailed introduction of the 2018 coaching panel and support staff which includes some new and familiar faces across the four grades. He went on to set the scene for what he anticipates the new season will hold as well as his expectations of the playing group through the pre-season and beyond.

David will be assisted by Greg Conroy who has a wealth of experience as a player and coach in Ballarat and at Redlands. Greg adds another welcome balance of new blood and experience to the group which the Tigers anticipate will freshen up the playing environment.

Bill Stephens will also form part of the coaching panel having recently retired after a stellar triple premiership career at the Tigers. Stephens has been a Tiger since his days in Auskick and brings the right mix of experience, professionalism and passion to the role.

All this before the Tigers new strength and conditioning guru Glenn Kirby took the group through their paces. Kirby has been a member of the Tigers playing group for some years and now owns and manages a successful personal training business, Define Health and Fitness, where a number of the players are already devoted members. He has designed a programme which will suit the diverse range of ages and physiques evident across the group with a view to getting everyone to their physical best for the new season.

The playing group was energised by a youthful injection of an enthusiastic group of players coming on from the 2017 colts along with some new faces transferring in for the new season. The Tigers welcome Jake Warren from Redlands in a key signing for the new season. Warren is a small forward who will add some spice to the Tigers 2018 attack having already played at NEAFL and QAFL level for Redlands, Brisbane Lions and Mt Gravatt at the tender age of 20.

The Tigers hierarchy are very pleased with the continued loyalty shown by the playing group who will don the black and gold in 2018 in the pursuit of success. The mix of experience and youth augers well for the Tigers for the new season.

Clint Brunnenmeyer looked strong and fresh last night after a couple of months enjoying some welcome time away from the coaching mantle and will be out to enjoy his new year as a mentor and leader for the new wave of Tigers coming through while 2016 Best and Fairest winner Zac McLean was on the track early to get his new season underway. He will once again be a very important player in 2018.

Club Captain and 2017 Best and Fairest winner Jack Collings has stepped up his drive for club success joining the 2018 Club Committee and providing front and centre support for the important activities like the Colts Information Day and Working Bee in his customary leadership fashion.

The Tigers were pleased to see young ruckman Jamie Ivers on the track last night after an injury interrupted 2017 season at the Lions Academy. Ivers has great potential and the Tigers hold him in very high regard as a developing tall for the future as well as a quality individual.

The training squad includes players from all grades with the welcome sign prominently out for anyone looking to join the Tigers at any level.

The successful third grade side will be looking to get a good start in division 4 after being promoted from division 5 where they achieved premiership success.

The Division 4 competition is highly competitive with a wide range of talent running out each week due to the attractive Friday night timeslot. The Tigers will not need to take things for granted if they are to be competitive in 2018.