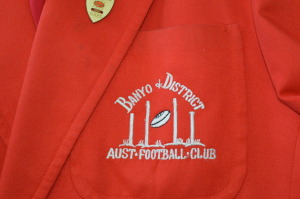 There’s a team shows no fright and their colours red and white
And they call us the Banyo Bloods
For the team that we are licking, the ball we are kicking is such a sight to see
You ought to see our boys go up for a mark – they go up so high – they don’t come down till dark
Any team that thinks they’re good Banyo puts them on the wood
We’re on the road to a premiership
Up the Bloods!!

And so went the much loved Banyo anthem to the tune of the Australian Folk classic Along the Road to Gundagai.

The Bloods will once again come together this coming Saturday 2nd December 2017 in the public bar of the Breakfast Creek Hotel at Midday to enjoy a roll call of players, supporters and friends who represented or were part of the Bloods between 1970 and 1993 in a halcyon period of Queensland football.

The Bloods were formed out of a group of players who represented the Mayne Tigers in the late 1960’s in their third grade team when the Queensland premier competition was restructured. The Mayne Tigers assisted the fledgling club get underway with the clear intention to provide an opportunity for players who couldn’t get a game in the very strong Mayne Firsts and Seconds who had been involved in every grand final of the previous decade. However the club attracted plenty of talented players who either played first grade at Mayne and came down to play for the Bloods or who went to the Tigers to play at the highest level of footy in Queensland at the time.

The Bloods competed at the highest level in the South Queensland Australian Football Association for a number of years but achieved their greatest success in Division 2 where they were premiers in 1972, 1973, 1975 and 1982. The Bloods also regularly fielded a reserve grade side which enjoyed premiership success in 1980.

The era of the Banyo Bloods was one of the most exciting and passionate periods in Queensland Footy and there will sure to be many great tales shared next Saturday at the annual reunion.

All Banyo Bloods are invited along with Mayne Tigers young and old.