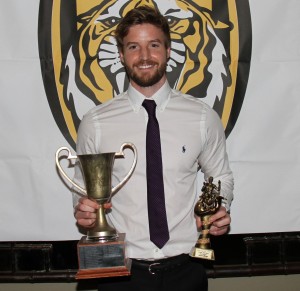 The Mayne Tigers celebrated in style last night at their Annual Presentation Night at Victoria Park Golf Club to cap off another successful year.

In a very popular culmination to the night, a very humbled Club Captain Jack Collings accepted the Keith Beavis Club Champion Award after receiving sixty five votes to eclipse Tiger ruckman Sam Nevins who finished on sixty two votes in a close finish. Collings gave credit to a range of his mentors including cousin Caleb Brown and the experienced leaders in the Tiger group of Dean Hartley and Tom O’Malley in particular. It was a big year for him as he took on the critical role of Club Captain, a position which has only had two incumbents in the previous sixteen years in Caleb Brown (5) and Andrew Housego (11).

The Mick Nolan Players Player Award went to Tom O’Malley recognising the Tiger defender for his terrific season. Coach Clint Brunnenmeyer paid tribute to O’Malley for his amazing efforts during 2017 and prior years recognising the number of highly credentialed opponents that he has eclipsed to make him a standout leader in the Tigers premiership successes.

Dean Hartley was recognised with the Most Consistent Award after coming in third place in the polling on 57 votes. Consistency is certainly synonymous with Hartley as has also been a critical and reliable member of the Tiger’s defence for many years.

Danny Evans was surprised to receive the Most Improved award for his breakout season in securing a regular senior position after having been a three time winner of the Reserves Best and Fairest award over recent years.

It was no surprise that Corbin Sellen was awarded the One Percenter Award. He is renowned for his preparation, tenacious tackling and courage.

The Rising Star and Everton Districts Sporting Club Award went to Dan Schmidt for his emergence into the senior team in his first year in open age. As a tall and athletic ruckman the Tigers are excited for the future of this capable young man who played eleven games and kicked eleven goals in an impressive debut.

Zac McLean received the Most Determined Award backing up his 2016 Club Champion Award while Sam Paterson was judged the Most Courageous.

Clint Brunnenmeyer summed up the senior team’s season as a positive one despite the ultimate end on the table. The Tigers were able to infuse the team with new blood and achieve some very good results including a back to the wall win against the ultimate premiers in the middle of the season.

Corey Massingham was awared the Graham Walters Best and Fairest in the Reserve Grade as well as the Peter Ivers Players Player Award to go with his QFA Division 1 Reserves Highest Goal Kicking Award.

In the Volunteer Awards Tony O'Connor received the Jack Kennedy Best Club Person Award while Graham Walters was recognised for his 50 Years Service to the Tigers. Russell Ditchburn was recognised with Life Membership.