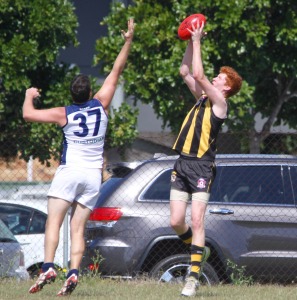 The Mayne Tigers finals campaign came to an abrupt end on Saturday with the Reserves going down to old rivals Coorparoo in a game which had to be won to keep the dream alive in 2017. The Tigers paid the price for a poor second quarter which they could not recover from once again proving the old adage that a full four quarter effort is required to win games.

For the second week in a row the Tigers got off to a very good start to lead at the first break and appeared to be in tune with the importance of the occasion. The Tigers held a small lead but were under no illusions that this was a do or die final.

However, also for the second week in a row a different team emerged from the quarter time huddle as the Coorparoo Kings took charge to dominant the Tigers to kick four goals without a point in response.

The Tigers had left the hard work to too few with Danny Evans trying his hardest to lift the team along with one of the youngest Tigers in Dan Schmidt pushing himself around the ground in another big man game.

The half time position was certainly not ideal but the Tigers boast plenty of talent and the lead was less than four goals.

The Kings were not short on talent either being in a similar position to the Tigers with their senior team also out of the finals race leaving several quality performers in their squad.

The premiership quarter was a critical arm wrestle with both sides going toe to toe in an even contest which left the margin exactly the same as at the main break. The Tigers were fighting it out with Ryan Eyles and Scott Webber defending grimly while in the middle Gabe Dillon was in and under.

The last half an hour of the 2017 campaign was indicative of a typical final with neither side able to break away but the Kings lead achieved in the second quarter was all that was needed to secure their place in the preliminary final and consign the Tigers to spectators for the first time since 2013.

Whilst the Tigers group was one of the best the club has fielded this season, the group wasn’t able to pull together as had been hoped. A difficult campaign for the Tigers with the seniors so badly affected by injury did not help but in the end that’s footy and there are no excuses.

The positive from 2017 is that the Tigers were able to blood a good group of young players that will be better for the experience and hopefully hungry for more in the seasons to come.