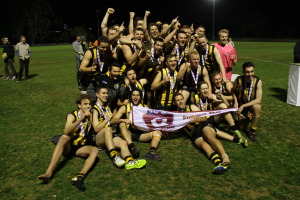 In their third year of existence the Mayne Tigers Third Grade team delivered the ultimate success with their first premiership flag in a crackerjack grand final at Coorparoo against a gallant Collingwood Park.

The Division 5 competition is played on a Friday Night and is one of the fastest developing competitions in South East Queensland attracting a high quality range of players who see the timeslot as the most accessible and relevant to their lifestyle.

The Mayne Tigers had played the Collingwood Park Power on three occasions in 2017 prior to the Grand Final on Friday night, being successful on each occasion and limiting them to less than 50 points on each occasion but this was a really big game that both sides desperately wanted to win.

The Tigers got off to their customary good start with a big set shot ball buster from outside 50 by midfielder Adam Minchev to start the night but the pressure of the occasion was showing with inaccuracy keeping the Power in the game. The Tigers went to the break with a sixteen point lead but a sense of missed opportunity.

The game had been billed as a shootout between the two competition leading goal kickers in Ryan Major from the Power and Tom Ditchburn from the Tigers but strategy was always going to be key to this big game.

The Tigers had a plan for Major and Ditchburn went into the ruck to take on the Power’s dominant big man in Brendan Kucks.

James Allen went to Major keeping him goal less for the night in a critical effort for the Tigers while Ditchburn played like his life depended on it rucking for the full four quarters and taking critical marks around the ground as the two big men duelled out the night.

The Tigers midfield were terrific led by Dylan Oats who dominated the game to take out the man of the match while Minchev and Joel Malbon were inspirational and effective.

The Power came back in the second quarter to get within seven points of the Tigers with all the scoring happening at the northern end effected by a light breeze.

The Tigers critically lost Ollie Allbutt and Ben Michel off the half back to leg injuries during the second quarter in a major blow to the Tigers run and carry.

The Tigers threw everything at the Power in the third quarter but once again inaccuracy with three goals and six points leaving the door slightly ajar although they had amassed a solid five goal lead.

Once again all the scoring was at the northern end as the Power rallied to throw everything at the tiring Tigers who were now down to nineteen men with Matt David also succumbing to a leg injury after playing a big role all night. The Power kicked three straight goals in a blistering rally but in the end the defence held strong to have the Tigers victorious by thirteen points.

Great credit goes to Playing Coach Murray Laing who was also impenetrable and attacking in his role in defence for the Tigers. Team manager John Laing was also humbled to accept praise from all the team and the club for his incredible efforts to get the team up and going.

In the other big game for the weekend, the Mayne Reserves went down to Noosa 15.13.103 to 6.5.41 in the Division 1 Reserves Qualifying Final. They will now play Coorparoo at Springwood on Saturday 2nd September at 11.00am in a must win semi final.