Tigers go down fighting to the last 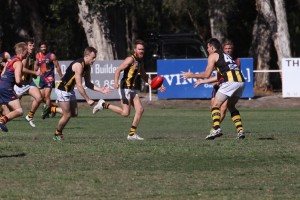 The Mayne Tigers went down fighting in their do or die clash with the Noosa Tigers at Weyba Road on Saturday afternoon. Mayne had to win this last fixture and rely on other club results to make the 2017 finals series but it wasn't to be.

The Tigers have had a marvellous run of success over the last few years but as has been said a number of times in recent weeks the footy gods were not smiling this year. A long run of injuries and absences stretched the squad too far for the team to be able to achieve another finals appearance.

The Tigers fielded their best team in weeks on Saturday but the lack of preparation for the important ins was always going to tell at some point however at the seventeen minute mark of the final quarter the two sides were still locked together.

In a miserable windy day at the beach, the Mayne Tigers kicked with the wind in the first quarter and were very pleased to get away with a quick fire three goals to take advantage but their Noosa rivals steadied the ship to kick three return goals which would prove telling as the day wore on. At the end of the first term the scores were level at four goals two apiece.

It was the Noosa Tigers turn to kick with the strong wind but they struggled to take advantage kicking two goals and eight behinds in the difficult conditions while the visiting Tigers could only muster three points despite some very hard work.

It was once again a day for the defence to shine and as has been the case over so many years, the Tom O’Malley and Dean Hartley combination led the way with Fraser Thompson also doing a power of work to hold back the tide.

In the middle, Captain Jack Collings was doing his best to take advantage of the excellent tap work from Sam Nevins who once again worked tirelessly all day. It was also the crash and bash of Sam Paterson getting the ball out of heavy traffic which kept the Mayne side in the contest.

The third quarter was always going to be the time to get some scores on the board with no respite from the wind. The backline did their job holding the locals to just one goal while up front veteran Andrew Housego threw his weight around to advantage while Xavier Craven kicked three quick goals to get the Tigers up and going. The Tigers managed six goals for the quarter to take a two goal lead into the final stanza but the question was now would it be enough.

The Tigers defended grimly for most of the last term while the Noosa forwards still couldn’t hit the mark. After edging to a tied position late in the quarter, the visitors couldn’t hold on any longer while the Noosa Tigers finally started to kick truly to run away to a solid win which did not reflect the game which was an entertaining tight affair all day.

As fate would have it, the result would not have changed the ladder with Caloundra and Coorparoo both recording big wins to secure their own place in history.

The Tigers will now pin their hopes on the Reserves who will face Noosa again this coming Saturday in the Qualifying Final at Maroochy and the Thirds who will play Collingwood Park in the Grand Final at Coorparoo this Friday Night at 7.30pm.